)
We look at ranking of Data Scientists according to Kaggle competitions, LinkedIn skills, Online influence, and Research publications.

The New York Times Bits Blog had an interesting feature Data Scientists Get Ranked (Apr 8, 2012) which looked at Kaggle competition platform and their rankings of top competitors.

Kaggle found a similar ranking system in golf, where there is some team play, different kinds of competitions, and a payoff for doing well on a consistent basis. According to Jeremy Howard, Kaggle's president and chief scientist,

it makes little difference for a top performer if the problem is public health or essays in Arabic. The argument that great data science is just about letting the data talk holds true.

Kaggle plans to rank everyone participating in Kaggle contests, based on a rolling average of performance over the preceding 12 months. The top 10 Kaggle contestants as of Apr 2012 are listed below.

What is interesting, is that apart from Kaggle's Jeremy Howard, the others appear to be working not as data scientists/analysts, but in related professions - and compete in their free time.

We can also look at LinkedIn ranking of professionals with "Data Mining Skill". Currently, they are

Another interesting ranking of online influence is provided by Traackr - see more about it in this KDnuggets story: Top Online Influencers in Data Science 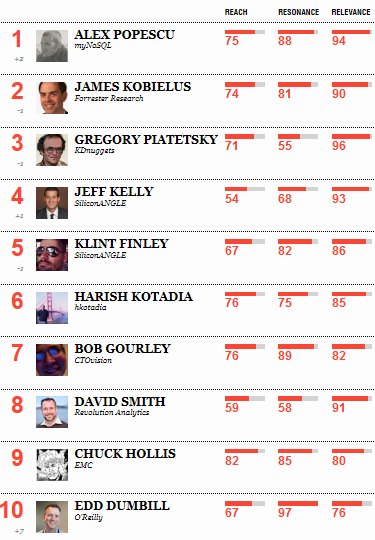 Finally, there is also a ranking of real scientists - those who publish research papers and books. Here are top authors in Data Mining Publications, ranked by H-Index (a measure which combines the number and the impact of author publications)


ssmitr0@yahoo.com
This is a great article. These folks deserve some recognition.