KnowledgeMiner data-driven predictions of global warming predict smaller rise than IPCC. IPCC scientists say their projections are more accurate. See for yourself who is right.

In September 2011, we presented a medium-term (6-year) quantitative prediction of monthly global mean temperatures based on an interdependent system model of the atmosphere developed by KnowledgeMiner, which was also discussed at Climate Etc. in October 2011. This model describes a non-linear dynamic system of the atmosphere consisting of 5 major climate drivers: Ozone concentration, aerosols, radiative cloud fraction, and global mean temperature as endogenous variables and sun activity (sunspot numbers) as exogenous variable of the system. This system model was obtained from monthly observation data of the past 33 years (6 variables in total: the 5 variables the system is actually composed of (see above) plus CO2, which, however, has not been identified as relevant system variable), exclusively, by unique self-organizing knowledge extraction technologies.

Now, more than a year has passed, and we can verify what has been predicted relative to the temperatures, which have really been measured (fig. 1). 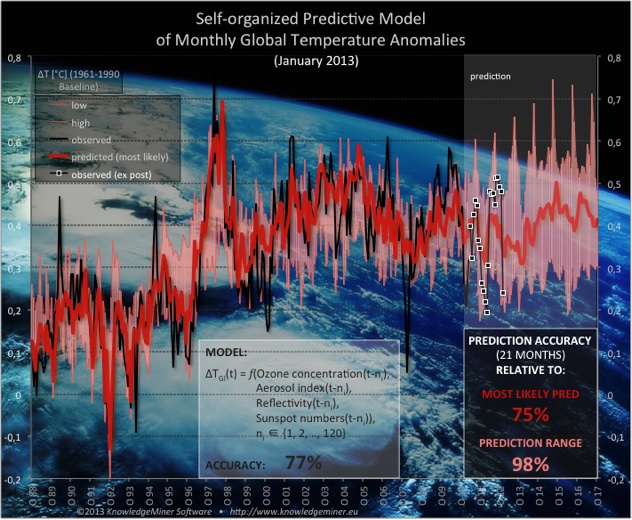 Verifying the prediction skill of the system model from April 2011 to December 2012, the accuracy of the most likely forecast (solid red line) remains at a high level of 75%, and the accuracy relative to prediction uncertainty (pink area) is an exceptional 98%. Given the noise in the data (presumably incomplete set of system variables considered, noise added during measurement and preprocessing of raw observation data, or random events, for example), this clearly confirms the validity of the system model and its forecast.

we show that not only have the IPCC surface temperature projections been remarkably accurate, but they have also performed much better than predictions made by climate contrarians (Figure 1).