Many professions have a traditional hat and a logo. What should a self-respecting data scientist wear? We review several proposals. Send us your suggestions.

What should data scientists wear?

For any kind of hat, there should also be a logo.

The combined brainstorming of Talent Analytics and KDnuggets have produced the first 3 designs for the logo - see below. 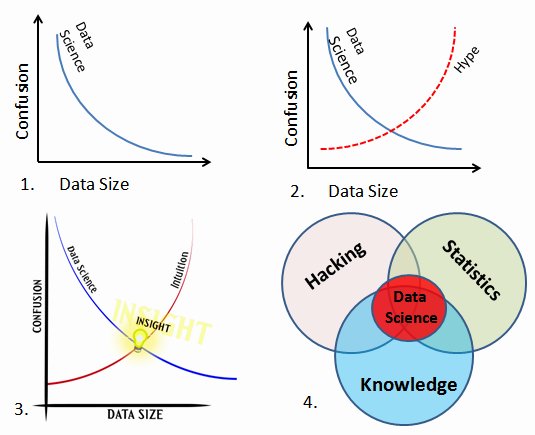 The first 3 graph designs have Confusion on the vertical axis, Data Size on the horizontal axis, and a Data Science curve showing which decreases in confusion as the data size increases.

Version 2 also has a red Hype curve (increasing confusion as the data size increases).
Version 3 has Intuition curve, and Insight at the point of intersection of Data Science and Intuition.
Version 4 is a simplified version of Drew Conway Data Science Venn Diagram.

Which of these design do you like best? Vote via twitter by replying to @kdnuggets with your selection corresponding to the design: #DataScienceHat1, #DataScienceHat2, etc

Do you have a better design for a data science logo ? Please email to

If there is sufficient demand, we will produce actual physical data scientist hats, with white-hat and black-hat options, of course. There could be a snake-skin version for Python Data Science.

In addition, data science profession could have approriate one-liners, such as

What are your favorite data science one-liners?