IBM announced several related technologies in a bid to lead the Big Data Market, including a dramatic 8-25x BLU Acceleration for DB2, an easy-to-use Big Data Platform, and a system for Hadoop.

IBM made a major announcement on April 3, 2013 at Almaden Research Labs, in front of a room full of analysts, broadcast on livestream, and accompanied by a lively chat around #BigDataMgmt tag. Almaden has a long history of innovation, including being the birthplace of SQL and (likely) the first data mining algorithm "Apriori", developed in 1990s by Rakesh Agrawal and Ramakrishnan Srikant.

This time IBM announced a set of technologies aimed at significantly speeding up Big Data processing while at the same time simplifying data access and use. 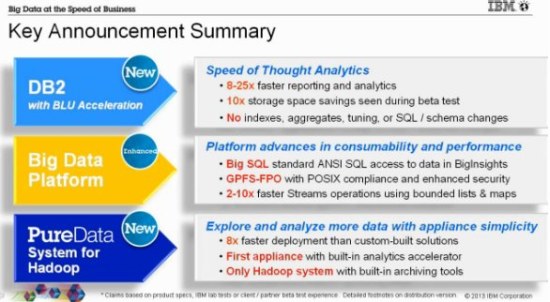 Here is an example IBM gave:

The Result: In seconds or less as each CPU core examines the equivalent of just 8MB of data

All offerings are available in Q2, except the PureData System for Hadoop, which will start shipping to customers in the second half 2013.

Many leading analysts were in the audience or listened to the Livestream from Almaden and commented on Twitter. Here are some selected tweets for #bigdatamgmt tag

Additional information will be presented on Apr 30 IBM webcast bit.ly/15vh2pI .