Stephen Wolfram data mines anonymized Facebook data from over a million people who used Wolfram|Alpha personal facebook analytics. See what he found and how you can analyze your facebook data.

Stephen Wolfram is a brilliant scientist, the founder of Mathematica, and more recently of Wolfram Alpha, which has many intelligent and knowledge reasoning capabilities. A recent addition is Wolfram|Alpha Personal Analytics for Facebook. You can analyze your own Facebook graph for free, and over a million people have done it.

He found that on average, people have 342 friends on Facebook.

Here is a graph showing the number of friends vs. age. 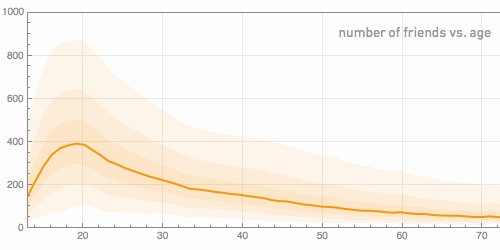 We note that the number of Facebook friends peaks when a person is around 18-20 years, and slowly declines afterward. Is it a reflection of social trends or an artifact of Facebook being more popular among younger people? Or something else? 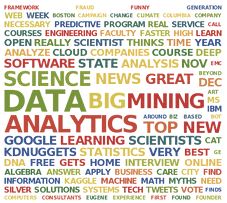 Here is a word cloud from KDnuggets facebook postings, generated by Wolfram Alpha.

Comments from the web

The peak at age 20 has to do with the adoption and use of Facebook for what it was originally intended - creating circles to ease the college course work load. The more connections you have in college courses the easier you're life will be - notes, previous exams, ect. The decline is from older people generally adding more family and less friends to Facebook.

I have not read the book, so my comments should be taken with that in mind. But, what strikes me from the example given of one of the most interesting findings (the chart of the number of friends as a function of age) is that this is something that would be found with probably at most 1000-5000 observations instead of 100 million observations, at least with methods that avoid error in predictive modeling and thus easily allow the modeling of nonlinear effects in small samples..

I would be interested in knowing what findings resulted specifically because of the 100 million observations that would not have been possible with small representative samples of data.