I talk to Social Market Analytics founder Joe Gits about using Twitter Sentiment for Investments and their "secret sauce" which makes their platform effective.

Trading on Twitter sentiment is not a new idea.

collective mood states derived from large-scale Twitter feeds are correlated to the value of the Dow Jones Industrial Average (DJIA) over time. ... We find an accuracy of 87.6% in predicting the daily up and down changes in the closing values of the DJIA

Although this study was soundly criticized by many professionals, a hedge fund (Derwent) was started in 2012 using the strategy based on the paper ... and was "quietly liquidated" one month after launch, despite reportedly returning 1.86% and beating the overall market.

Social Market Analytics (SMA) which claims that it extracts signal from Twitter noise and uses Twitter sentiment for trading.

I talked to Joe Gits, founder of SMA to find out what SMA is doing and how different its approach is.

(Full disclosure - SMA has not paid KDnuggets in any way).

SMA is collecting currently over 600 million tweets per day.

SMA started by using tools for sentiment analysis and developed number of measures, the most important of which is

S-Score™: the weighted normalized representation of our sentiment time series over a pre-defined look back period - basically how much sentiment now differs from the average sentiment in the past for the same stock.

The idea was to look at the stocks with significant deviations (+/- 2 STD) from the average S-Score, and use them for short-term trading.

This idea was reasonable, but did not produce great results.

The breakthrough occured around June 2012 when SMA found a way to restrict attention only to qualified investors, a group of people, selected algorithmically once a month, that regularly tweet about the market. The selection is done once a month to minimize scams where people start to promote a particular stock and then disappear.

Furthermore, SMA also measures sentiment based on Indicative Tweets, a subset of all tweets which are relevant to stocks. SMA had 18 million such tweets in April of 2013, and they grow about 10%/month.

The results of the strategy are shown in the graph below. 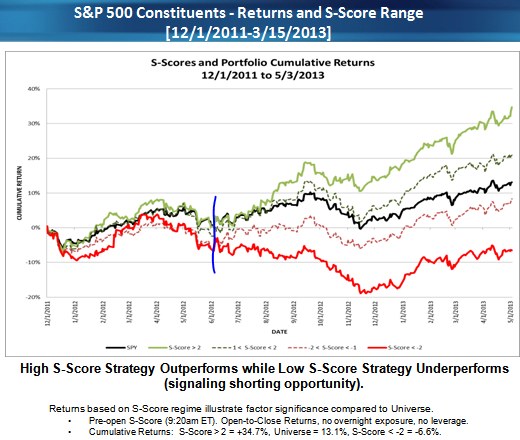 Note two things about this graph:

Here are some examples of Indicative Tweets for Tesla ($TSLA) from May 28, first hour after the close:

(KDnuggets does not own any Tesla stock)

Of course, sentiment is not the only investment tool.

Joe told me that a typical hedge fund uses about 7 measures, but the stock sentiment should be one of them.

You can try it for yourself at