The National Security Agency and the FBI are tapping directly into the central servers of nine leading U.S. Internet companies, extracting audio and video chats, photographs, e-mails, documents, and connection logs that enable analysts to track foreign targets. ... The program, code-named PRISM, has not been made public until now.

What is new is that US government collecting data from internet service provides: Microsoft (Hotmail), Yahoo, Google & Gmail, Facebook, PalTalk, AOL, Skype, YouTube, Apple. Microsoft was the first company to join the PRISM (in Sep 2007), and Apple the most recent, in October 2012.

The program relies on US being the world's telecommunication backbone. Since the target's phone call or chat will the cheapestpath, not the physically most direct path, it could easily be flowing through the US. 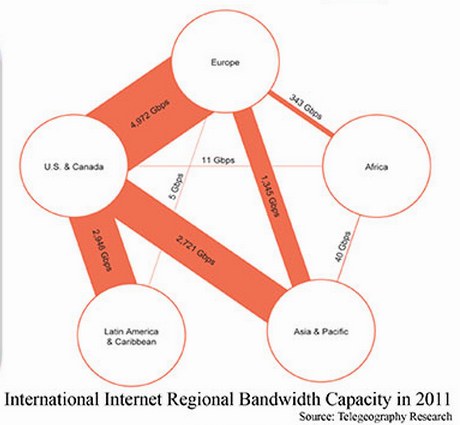 This is related to another revelation that NSA is getting phone records from Verizon. Interesting that Verizon is handing over only meta-data - call logs, not the content of the conversations. The call logs are sufficient for social network analysis.

"My sense is they are looking for network patterns, ... who is connected to whom and whether they can put any timelines together. They are also probably trying to identify locations where people are calling from."

"It's incredibly invasive ... This is a consequence of the fact that we have so many third parties that have accumulated significant information about our everyday lives."

New York Times reportsthat US Govt officials said that the program is authorized under a foreign intelligence law that was recently renewed by Congress, and maintained that it minimizes the collection and retention of information "incidentally acquired" about Americans and permanent residents.