New Poll: Has Big Data Reached the Hype Peak and is due for Decline and Disillusionment?


New KDnuggets Poll is asking "Has Big Data Reached the Hype Peak and is due for Disillusionment?" Google Trends suggest that the growth in "Big Data" is over, but analysts are split. What do you think? Please vote on www.kdnuggets.com. 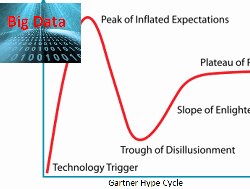 Has "Big Data" reached the hype peak and is due for disappointment soon?

Big Data has received huge interest from the industry and the public starting around 2011.

However, several recent articles have suggested that "Big Data" is overhyped and correction is overdue, as outlined in Gartner Hype Cycle

Here are Google Trends for "Big Data", and for comparison also for "Data Mining", "Predictive Analytics", and "Data Science", from Jan 2010 to Aug 2013, worldwide. 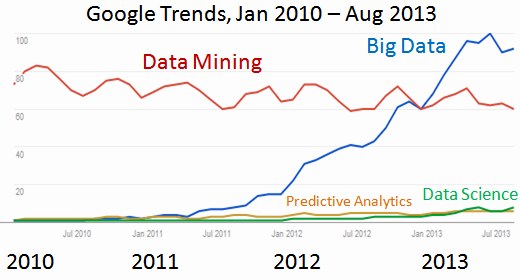 We note that "Big Data" has risen sharply starting in 2011, and has exceeded "Data Mining" in popularity around Jan 2013. The search volumes for "Predictive Analytics" and "Data Science" are much smaller than for other 2 terms.

However, around April 2013 the growth in "Big Data" searches has stopped and we can even see a small decline. Some of it could be seasonal, due to summer (we can see consistent slumps around July in "Data Mining" searches), but "Big Data" did not have a summer decline before, in 2011 or 2012.