What drives Global Warming? The KnowledgeMiner Self-learning Model from Apr 2011 matches observations at 73% accuracy, while IPCC forecast at 10%.

Please allow me to inform you about a recent actual vs predicted update of a medium-term quantitative forecast of monthly global mean temperatures which was discussed in two major climate blogs in 2011 and 2012. This forecast is obtained from an interdependent system model of the atmosphere developed by self-organizing inductive modeling based on observational data, exclusively. No prior assumptions, expectations or other subjective adjustments were used in the models.

This model describes a non-linear dynamic system of the atmosphere for short- to medium-term forecasting consisting of 5 drivers:

Note that CO2, though provided as input data, has not been selected as relevant climate driver by self-organizing modeling. This is a CO2-free prediction model.

As of August 2013, the OUT-OF-SAMPLE prediction accuracy over 29 months of the most likely forecast of the self-organized system model is 73%. The IPCC AR4 A1B temperature projection compares at 10% accuracy while still very accurately (>90%) predicting the observed development of atmospheric CO2 concentration. 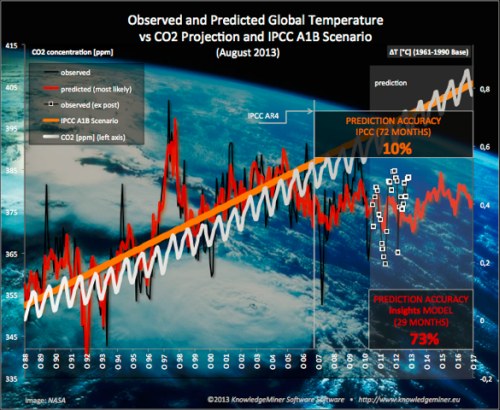 In the past 30 years it has been shown that for modeling complex systems from noisy data self-organizing inductive modeling has a number of advantages over traditional theory-driven deductive modeling ( more ), and there is much more potential in it, which we hope will show up in the future.