Onalytica 2013 Q4 list of #BigData Influencers on Tweeter is led by @KirkDBorne, @jameskobielus, @timoelliott, @BernardMarr, and @kdnuggets. We compare their list with Klout and find only one intersection among top influencers.

Onalytica has done an interesting analysis of Big Data influencers on Tweeter.

They took the tweets for the last 6 months containing the hashtag #BigData and treated mentions of other tweeters as a link. This initial network was made up of about 150,000 nodes. After removing isolated components, they ranked the nodes by PageRank.

Of course, no two rankings will be exactly the same, so for comparison I also added Klout, which considers not only Tweeter, but also Facebook, LinkedIn and other networks. Here are the top 20 entries in Onalytica list.

For comparison, here are

We only see one name in common between Onalytica and Klout lists, which I am pleased to note is @kdnuggets.

The chart below shows there is no correlation between Onalytica rank and Klout. 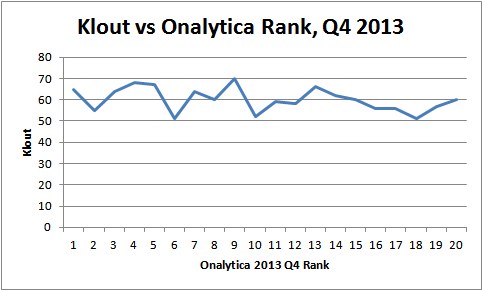