KDnuggets Review of Analytics Marketplaces: The Next Big Thing for Big Data

We review Analytics App Marketplaces from Alteryx, Amazon (AWS), BigML, Datameer, RapidMiner, and Windows Azure. Who will create the next iTunes for Analytics?

Big Data is a very hot trend, but to make use of it, companies - big and small - need predictive analytics, data mining, and data science applications. While in the past such applications were developed by companies' own software engineers, we are currently seeing a very interesting trend - emergence of Analytics Marketplaces.

A vibrant marketplace for apps was a big part of the success of iPhone and Android devices. Now, analytics companies are hoping to use a similar strategy for success, and are creating Analytics Marketplaces where developers can offer their apps and users can browse and download them.

Based on the Software-as-a-Service (SaaS) model, the marketplaces let users pay only for the software feature they need and only for the time duration they need the software. Through SaaS model, users are able to get advanced analytic capabilities even with very thin client installations suitable for most mobile devices including tablets and smartphones. 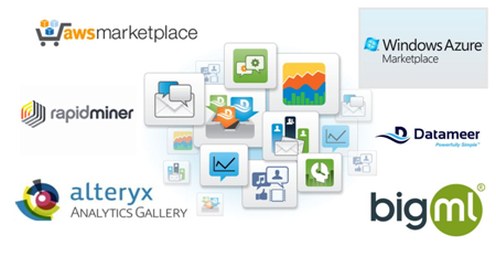 What do Analytics Apps Marketplaces Offer?

For Developers or Data Scientists

Analytics App Marketplaces can be viewed as ecosystems where all the participants benefit from each other's presence on a common platform. The developers (or data scientists) do not need to worry about maintaining several versions of their analytic solutions for different platforms. So, while saving cost, this also helps them focus on their more important task of developing new solutions. In order to attract developers, most of the marketplaces offer one-click publishing solutions and if the developers decide to put a price for their apps, they get a major portion of the sales revenue (usually 70%). Besides, through marketplaces, developers also get to reach a large pool of customers, who are actually interested in developers' apps.

This seamless integration of apps with the underlying analytics platform is of great benefit to consumers as well. Consumers can easily install and manage analytics solutions that meet their needs, while paying for only what they need. Also, consumers can now try new analytics apps without worrying much about trust and security, as all the apps on marketplace are audited and regulated by the platform administrator.

Finally, the platform owners or administrators, or in other words the firms owning the underlying analytics platform as well as the analytics app marketplace also derive great benefits from increasing number of developers and consumers. Through such a marketplace, they are able to offer much more value to customers than they could all by themselves. The marketplace helps them not just grow their customer base but also help them retain customers in the long run.

Alteryx helps small and enterprise customers with data storage, retrieval, management, reporting, and analysis of both spatial and non spatial data. It launched Alteryx Analytics Gallery in Fall 2012 with more than 30 proven analytic applications to "consumerize Big Data analytics in the cloud".

Amazon AWS marketplace, launched in April 2012, currently has more than 80 apps on Big Data. Leveraging the widely popular AWS and EC2 services, these apps provide intuitive analytics to users of Amason's web services through a very quick and convenient implementation (just "turn it on"). Most of the apps here are priced by-the-hour. "AWS Marketplace brings the same simple, trusted and secure online shopping experience that customers enjoy on Amazon.com's retail Website to software built for the AWS platform, streamlining the process of doing research and purchasing software" said Terry Hanold, vice president of new business initiatives at AWS while launching AWS Marketplace. 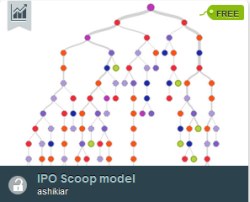 Datameer Analytics App Market was launched by Datameer in October, 2012. It made its debut with a variety of free applications, ranging from horizontal use cases like email and social sentiment analysis to vertical or even product-specific applications like advanced Salesforce sales-cycle analysis. "Our customers have analyzed well over 80 petabytes of data in the past year alone, and despite them being in very different markets, one thing we've noticed is that there are a lot of common analytic use cases amongst them," said Stefan Groschupf, CEO of Datameer, during the launch. Datameer Analytics App Market has made its every app completely open so that users can customize it, extend it, or even mash it up with other applications to get the insights they need. Now, this marketplace has around 80 apps, most of them being offered for free.

RapidMiner Marketplace (formerly Rapid-I Marketplace) was launched by RapidMiner in May 2011. This analytics apps marketplace passes on 70% of the revenue from paid apps to developers. Currently, its most popular extensions are text mining, intelligent discovery assistant and recommendation assistant.

Snap Analytx, launched in July 2013, is the first open marketplace for prediction models, not tied to any specific tool, language or technology. It currently accepts models implemented in R, Python, C++, Java, SAS, PMML, Octave and Mahout/Hadoop. The marketplace also includes an execution platform where potential users can try the models before buying, and allows deployment on Snap platform for a monthly fee. Currently there are about 10 models there, all free at the moment.

There are app marketplaces that offer analytics apps in conjunction with premium data relevant for the app usage:

No matter how hard these marketplaces are trying to lure the ISVs (Independent Software Vendors), it is yet to be seen if there would be start-ups dedicated to any single marketplace. As of today, software entrepreneurs want to be in as many markets as possible.

With no clear winner yet, Analytics App Marketplace is currently a hot trend pushing the boundaries of analytics both from the providers' end as well as from the consumers' end. The availability and quality of apps on such marketplace is starting to play a big role in the selection of Analytics platform that users' plan to commit to. While the consumers are well poised to benefit from the multitude of options and competitive pricing, the firms are aggressively trying to get a competitive lead in this comparatively new market.

Apart from the above mentioned marketplaces targeted towards delivering analytics apps to the masses, there are firms such as Kaggle, who operate literally in the opposite way, i.e. by using analytics skills and wisdom from crowds to solve the analytic challenges at big firms. Since its launch in 2010, predictive modeling firm Kaggle has evolved from crowdsourcing data analytics to a marketplace that bridges the gap between data problems and solutions.

Anmol Rajpurohit is the main writer of this post. He is a Research Intern at UCLA and also an intern at KDnuggets. He is finishing B.Tech. in Computer Science in India and is keenly interested in research and development work in the field of Computer Networks, Information Retrieval and Knowledge Management (Data Mining, Web Mining, etc.).

Gregory Piatetsky is the Editor of KDnuggets.