The rapidly rising term "Data Scientist" caught up with "Statistician" and surpassed "Data Miner" on Google Trends. However, Statistics remains a lot more popular than "Data Science", which begs the question: What do Data Scientists do? Clearly, it is not Data Science.

A recent blog on Flowing Data: Data scientist surpasses statistician on Google Trends prompted me to do a little further investigation.

This was especially relevant in light of the intense debate (over 250 comments) raging on LinkedIn Group Advanced BA, DM and PM, prompted by my post Why statistical community is disconnected from Big Data and how to fix it.

We also checked Indeed.com job trends, and we also see "Data Scientist" catching up with Statistician. "Data Miner" is a lot less popular job title than its Google Trends popularity suggests. Note also a surprising drop for both "Data Scientist" and "Statistician" towards the end of 2013 - it is a beginning of a "Big Data" hype evaporating, or perhaps another rebranding? 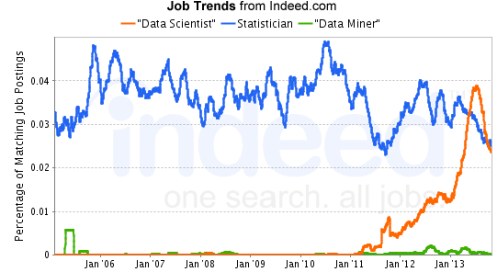 However, it is too early for data scientists to gloat, since Google Trends searches for "Statistics" greatly exceed those for "Data Science" (which is practically at zero level in the chart below). 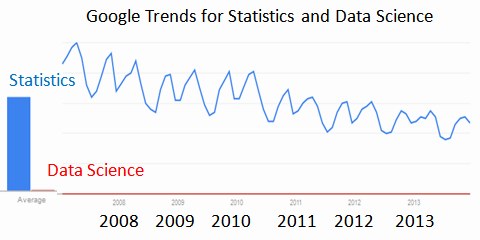 Which leads us to a question:

What do people think that "Data Scientists" actually do?
The evidence suggests it is not "Data Science".