DMCS (Data Mining Case Studies) 2013 Practice Prize was awarded at ICDM 2013 conference for a work on a novel and successful credit card fraud detection system, implemented in a Turkish bank. The Prize was partially sponsored by KDnuggets.

Below is a short description of the system:

This study is about the development of a new credit card fraud detection solution for one of the largest banks in Turkey. In developing a working system for credit card fraud, the researchers needed to be able to handle important properties of their domain, such as the cost of every individual false negative being different and the need to use a rules-based approach to fit with existing procedures. This led the researchers to favor Migrating Birds Optimization (MBO), which was able to build in variable costs easily and had other useful properties.

Development was completed in about three years and the system has been in use since February 2013. The number of fraud alerts being sent to bank customers has been reduced by 25% and the number of cases being referred to human investigators reduced by 50%. At the same time the system has automatically detected significantly more fraudulent transactions. The bank is estimated to save 1.5 million per year, as well as better customer satisfaction due to fewer false alarms and more thorough fraud removal. 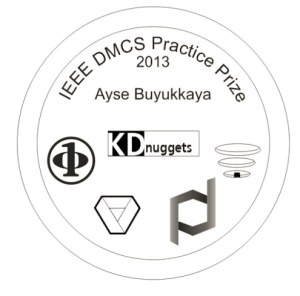 The DMCS Practice Prize has been running since 2005 with the mission of highlighting outstanding practical implementations of data mining. All papers undergo scientific peer-review and are published as part of workshop proceedings in KDD or ICDM conferences.

This year's DMCS Practice Prize was sponsored by sponsored by KDnuggets, Dstillery, PrecisionDemand, VigLink and IEEE.

Further details can be found at www.dataminingcasestudies.com .