New Poll: Did you switch between R, Python, or other Data Science Languages?

New KDnuggets Poll focuses on on the controversy around whether Python displaces R as language for Data Science, or whether R remains the dominant language. Please vote if you switched between R, Python, or other data analysis language in 2013.

A recent blog Python Displacing R As The Programming Language For Data Science has generated a lot of discussion and pushback, including 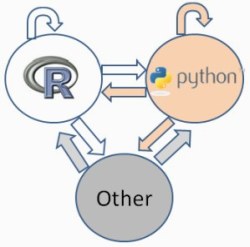 Recent KDnuggets Poll on languages for analytics, data mining, data science showed that R was used by 61% data analysts in 2013 vs 39% for Python.

The purpose of this KDnuggets poll is to look specifically at switching between R, Python, and other languages (apologies in advance to fans of SAS, Java, MATLAB, and other data analysis languages).

This poll is closed - here are the results of KDnuggets Poll Did you switch between R and Python in 2013?

and full analysis and discussion of R / Python switching among Data Scientists.