Poll Results: R has a big lead, but Python is gaining

KDnuggets Poll results show that R has a big lead among data scientists and data miners, but Python is slowly gaining.

If you used R or Python for data analysis/data mining in 2013, did you switch?

The results, based on 562 voters, indicate that R has a solid lead, and was used by about 77% of the voters. Python was used by about 32% of voters, and 24% used other languages. Note: some people used multiple languages, so the percentages add up to more than 100%.

However, we note that more R users (26%) are moving to Python than vice versa, and fewer R users (66%) are staying with it than Python users (79%). On the other hand, users of other tools are moving more to R than Python.

The poll gave options to keep using R/Python and switching between R/Python/Other, and I summarized the results in the following chart. 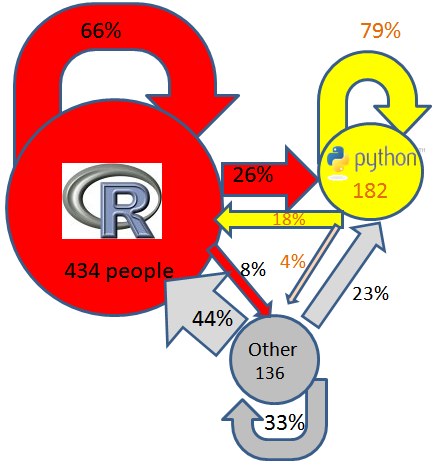 I realize that I am not engineer Minard and in process of doing this chart I gained even more appreciation for his map of Napoleon Retreat from Moscow, but my chart conveys the polls results faithfully.

Here is the table with the full poll results.

This poll was prompted by a recent blog Python Displacing R As The Programming Language For Data Science which has generated a lot of discussion and pushback, including