We revisit our analysis of top 30 LinkedIn groups for Analytics, Big Data, Data Mining, and Data Science and identify the largest, fastest growing, and most active groups. In 2013 the growth rate of top groups more than doubled, and growth rate correlated with the activity level.

We revisited our analysis of Top 30 LinkedIn Groups for Analytics, Big Data, Data Mining, and Data Science from April 2013 and extracted raw weekly data - the number of members, comments and discussions, up to Nov 25, 2013.

Note: You can get actual data from the HTML source code of the LinkedIn group Statistics/Activity page, look for dataset seriesName="Comments" and parse that data. Likewise for Discussions and Members. See the table with more details and link to download raw data at the end of this post. Thanks to KDnuggets intern Anmol Rajpurohit for collecting the membership, comments, and discussions data.

The most interesting finding is the acceleration of growth in 2013. While prior to 2013, the top 30 groups added on average 36 members/month, in 2013 the growth more than doubled to 80 members/month !

Here are 7 groups with the fastest growth in 2013 (annualized):

The chart below shows group growth vs group size. Color corresponds to age - redder is younger, bluer is older. 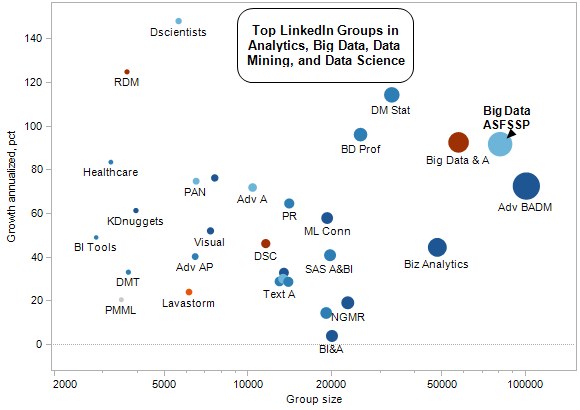 LinkedIn provides 2 measures of activity: discussions/week (actually posts) and comments/week. In 2013 there were 83% more discussions than comments: on average 2.57 discussions per 1000 members per week, while only 1.40 comments/1000 members/week. This implies that most posts have no comments.

The chart below shows average comments/week vs average discussions/week for all 30 groups, with a circle size proportional to group size and darker color corresponding to faster growth. Group name abbreviations and full stats are in the table at the bottom of the post. 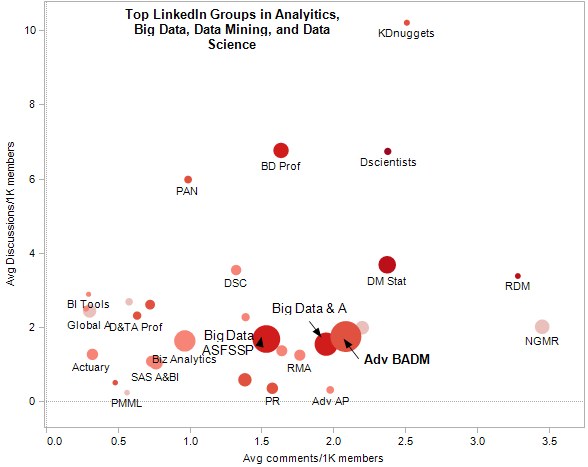 We note that most groups have between 1 and 3 discussions / 1000 members / week.

Since most activity is generated by a small number of people, it would be interesting to see how many people contribute to discussions and comments - an active core of the group. Perhaps LinkedIn could add such statistic in the future?

Note: one reason for such a high level of discussions (posts) on KDnuggets is that I post all www.kdnuggets.com/news blog items also on KDnuggets LinkedIn group. However, there are also many others who post on KDnuggets.

We can also chart growth vs activity level and observe that for most groups, activity seems to be proportional to growth. KDnuggets is again an outlier with a much higher number of discussions. The color corresponds to age, with blue for older groups and red for younger ones. 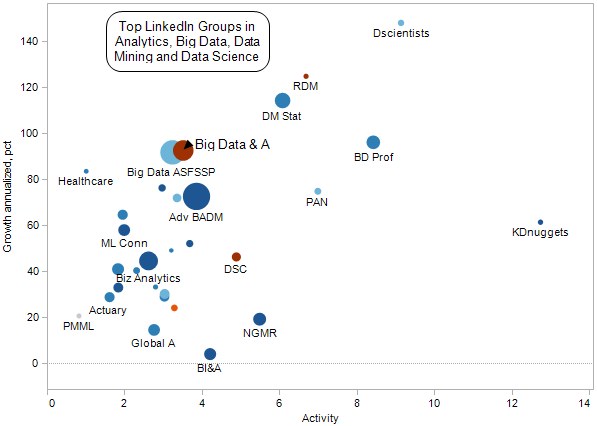 Another interesting measure of group engagement is the ratio of comments to discussions. According to this measure, the top 7 groups are

Here is the table with all 30 LinkedIn groups, with group abbreviation following the group name.

You can also download the raw data on top 30 Linked groups, in CSV format. Let me know what else you find!

Another interesting aspect is the behavior of subgroups. Two of the largest groups

have several subgroups that are very active and have many thousands of members. Subgroups could be a good topic for future analysis.