Social Media Analysis is a powerful tool if we discover customer sentiment from millions of online sources and not just go behind the numbers. Businesses are using the power of social media to gain a better understanding of their markets.

Imagine that you are at a networking event to talk about your product. Several people come to talk to you; some ask specific questions, some share their past experience good or bad while some share their ideas to improve your product. At the end of the event, any good networker will make a list of how many and who came to talk but more importantly he/she will try to understand conversations, learn from it and take appropriate actions. Now let’s look at this example from a Social Media (SM) context.

Social Media networks are like networking events where brands want people to come and talk to them about their experiences, likes, dislikes and give suggestions. If that is the case why do 95% of social media tools stop at just the volumes of how many people came and talked to you or about you but never delve into the details of what is being talked. Tools tell that people are talking about you but not what are they talking about, to whom, how and why those conversations happened. Present tools are like robots with fed rules but no brain. But had it been a real networking event would you have wanted such a robot? Would it not be more useful had we been analyzing social media conversation with a context specific to the brand or campaign engrained not a generic algorithm based on generic knowledge?Can you rely on a robot to decipher novel ideas suggested by your customers or would it not be useful to have a human assisted by machines to help understand hidden meanings?If you think so, keep on reading.

One of the biggest frustrations I have with present social media monitoring practices is excessive reliance on volumetric metrics like number of tweets, trends, impressions, no. of fans, likes etc. Some of these metrics are quite important but my disagreement lies with over-emphasis (& sometimes blind following) on these and often a complete disregard for bringing meaning to actual conversations. Once I was talking to a SM analyst in New York and he almost came to blows with me on usage of a metric called Impression. Impression tells the number of times an ad was seen [1] [2]. In the context of SM conversations (talking specifically for twitter) most analysts count it based on the number of followers every tweeter talking about your brand has and assuming that whenever he/she tweets all of the followers will be sitting in front of their twitter to watch it!

Andy White, a Social Media Consultant has written about misuse of this metric in his insightful blog [3]. Impression can be used as an Ad (outdoor or online) metric because you possibly don’t have any other way to measure such but with Social Media that’s not the case. You cannot stop and talk to a billboard you liked but on Social Media you can do a lot of things like, say talk to it (comment), show it your friends (share) and possibly even carry it in your cellphone (save)! There are a lot of metrics which are simply copied from either Outdoor Advertising industry or Web Analytics or similar. Several such metrics might be good for comparison of various media but these are often misleading in understanding social media. Several social media tools are based on techniques rooted in web analytics. Web analytics are good for websites where people go from link to link but social media is not a mute web page but involves humanly interactions. 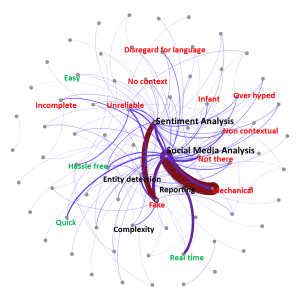 A lot of Social Media analysts will say that don’t we have sentiments and categorization options available in some tools to understand conversations. For those, I sincerely ask them to spare one day of their busy life to read through actual data going into their analysis and related outputs. Once I was reviewing a social media tool and was shown twitter search results based on a query around a brand. Vendor created a category map which looked quite cool thanks for the visualizations inbuilt. But on drilling into the actual data was when things turned out to be uncool. One of the categories was labeled CEO and we expected it to contain data around the CEO of that brand but actually only around 10% data contained related conversations. Not going into the technical reasons, point I am trying to make is that that often SM tools are like simple machines with no brains but why are we forgetting this fact. We need machines to help in the process not understand it for us. This brings me to sentiments.

Large number of times I look at sentiment analysis given by most tools and often I get 90%+ conversations marked as neutral. In most cases tools fail to understand context of the conversation due to which this problem arises. Most of the present day tools view language as a mathematical equation and process it accordingly while in reality language is complex and formed of structures and intricacies which go unnoticed. Some people suggest human coders for such cases but I feel that a dual approach of using human analysts & reviewers aided by powerful NLP enabled machine learning can help. 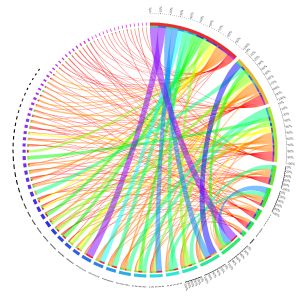 Before I close this blog, I would like to say that Social Media analysis is in its infancy and we need to constantly debate on what is right and what can be done better. I have often seen people either overhyping capabilities of social media while some undermining the power of social media analysis and view it with an eye of disdain. I feel that both camps are wrong. Social Media analysis can show insights that can never be hypothesized or deciphered by traditional survey research. It helps get opinion from hard to reach people expressing REAL feelings in real time which is impossible via survey. Yet there are lots of areas where SM analysis falls short; especially in understanding the WHY part and that’s where surveys can be important. Depth and volume of insights that can be gathered via Social Media analysis varies by industry and brands making traditional research necessary as a supplement.

I can go on and on but ending this blog, I will say that next time you see a social media analysis try to understand the conversations and not simply the numbers. It’s a new field so let’s be open minded but with an inquisitive eye. Like always, these are my observations but feel free to agree or disagree. 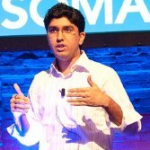 Preriit Souda is a Senior Analyst-Marketing Science (Advanced Analytics) at TNS (A WPP Company).
The views expressed are solely personal and do not reflect views of my employer or associated companies.