O'Reilly's Strata 2014 conference was held from Feb 11-13, 2014 at Santa Clara Convention Center in Santa Clara, CA. This conference brought together about 3100 people. Among them were the brightest minds in data science and big data: decision makers using data to drive business strategy, as well as practitioners who collect, analyze, and manipulate it.

Here are the highlights of keynote speeches that were delivered during the conference:

First day of the conference was mostly about tutorials. It had two day-long sessions titled "Hardcore Data Science" and "Data-driven Business day". Overall, all of the tutorials helped the attendees learn and update themselves with the latest technologies. Particularly, the hands-on session during tutorials was well appreciated by the crowd.

Second day of the conference started with keynote welcome by Roger Magoulas from O'Reilly Media and Alistair Croll from Solve For Interesting.

3. John Schitka from SAP emphasized on the crowd, explaining how we all can make the world a better place by coming together to collect massive data via crowdsourcing.

4. Ramona Pierson from Declara talked on uncapping learning at a massive scale by leveraging the cloud.

5. John Schroeder from MapR Technologies discussed few use cases of Hadoop. One of them was largest biometric database in India under Aadhaar project by Government of India.

6. Farrah Bostic from "The Difference Engine" introduced herself as a refugee from Advertising. She described various aspects involved in Market Research. She emphasized that how we decide what to measure does also matter.

7. Quentin Clark from Microsoft presented on how big data can reach 1 billion people. He mentioned that information can not only change business but people's individual life. He also emphasized on visualization of information as a powerful tool. 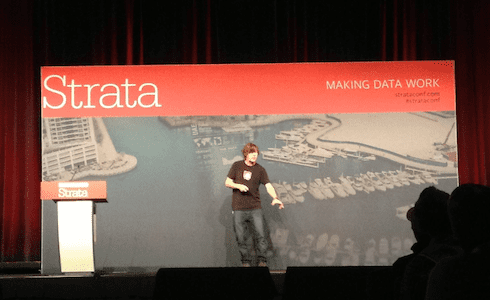 1. Joe Hellerstein (adjunct faculty at UCB) and Tutti Taygerly from Trifacta spoke of two different perspectives - tech and design. They described "Predictive Interaction" as a new model for high-level human-data interaction that radically improves the productivity and accessibility of the most time-consuming work in the analytics lifecycle.

2. Kaushik Das from Pivotal gave a great talk on how creating a digital brain can prevent disasters for a better world. He illustrated with examples how we can build a digital brain by collecting data from a large number of sensors and use the brain to find value in that data.

3. Boyd Davis from Intel announced new Intel Data Platform based on Hadoop. He shared a glimpse into the future of a datacenter-scale open-source operating environment.

4. Matei Zaharia from Databricks (also one of the Apache Spark Committers) presented on how companies are using Spark & where the edge in Big Data will be.

5. Anjul Bhambhri from IBM discussed how In-Hadoop analytics is changing the game through the possibilities of Hadoop.

6. James Burke, a science and technology historian, futurist, and author gave a captivating talk titled "The Future Isn't What it Used to Be". He emphasized that most of the problems come from interdisciplinary and not from particular area of study. During the talk he also quoted Aristotle's principles of science: apply methodical thought & reduce everything to simplest form (but not simpler). His talk ended with a huge applause. 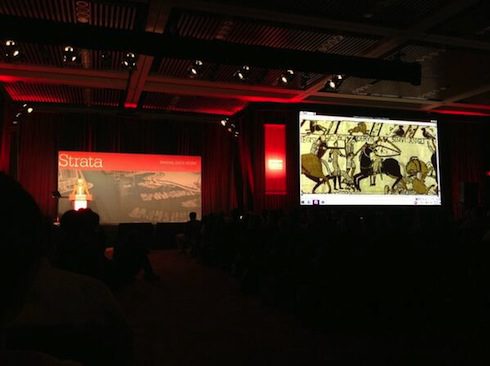 1. Megan Price from Human Rights Data Analysis Group discussed about the real count of casualties in Syria, variation in report from different agencies and how big data effects human rights. She emphasized that reporting pattern might be too different than reality.

2. Ben Fry from Fathom focuses on understanding complex data. He used war math to illustrate cognitive bias on luck and survivorship. He also displayed interactive data visualization using example of Connected China, an HTML5 application that uses a custom database to explore the cultural and political factors that shape the dynamics of power in modern China.

3. David McRaney, an author and digital media director gave last and fantastic keynote lecture on “Survivorship Bias and the Psychology of Luck”. He used war math to illustrate cognitive bias on luck & survivorship. He summarized luck as what we call the result of a human being consciously interacting with chance. Regarding survivorship bias he concluded by putting forward that the true business is a monopoly run by survivors and those who fall are rarely paid for advice on how not to fail. 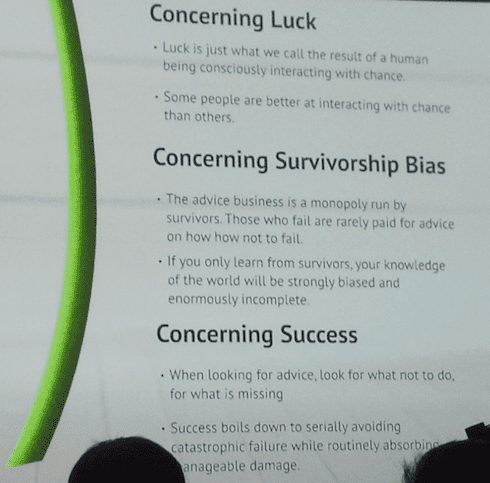 Following are tweets by @kdnuggets during the conference:

Click here to go through YouTube playlist for some keynote speeches and interviews held during the conference.