KDnuggets talks with a noted author Geoffrey Moore about his "Crossing the Chasm" book, his vision for Big Data analytics, when Big Data will cross the chasm, and advice for entrepreneurs.

Geoffrey Moore is best known for his exploration and expansion of the diffusions of innovations model in his bestseller book “Crossing the Chasm”, whose third edition was launched on Jan 28, 2014. He has been advising on business strategy to many of the leading companies in the high-tech sector, including Cisco, Cognizant, Compuware, HP, Microsoft, SAP, and Yahoo!.

The longer version of his bio can be found at the end of this interview.

Geoff recently delivered a keynote at Strata 2014 on “Crossing the Chasm: What’s New, What’s Not”.  Through an updated version of his “crossing the chasm” theory, he explained the current state of Big Data analytics and identified the critical success factors. During his short keynote filled with deep insights and great advice, Geoff highlighted the lessons learned in bringing disruptive innovations to market in the 21st century.

For reference: here are the slides and video of his keynote at Strata 2014 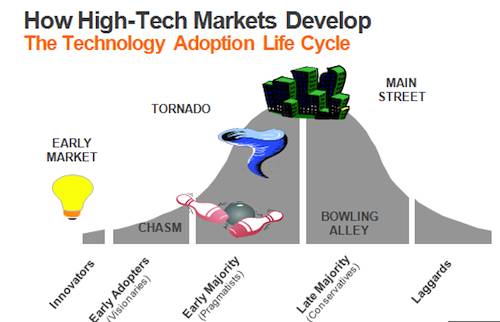 Anmol Rajpurohit: 1. Given the ever-increasing number of startups (as well as initiatives from existing companies), one of the biggest questions facing the Big Data industry is: Who all of them would be able to "cross the chasm" and survive the hype to become mainstream players? What strategy would you suggest to approach this challenge?

Geoffrey Moore: Before you cross the chasm, you have to get to it!  This means doing a series of one-off projects with large customers who have substantial resources to fund their own whole products end to end.  Each time you do one of these projects, some portion of it can be repurposed as part of a reusable whole product.  When you have enough reusable parts, then you can think about crossing the chasm.  At that point, you target a beachhead on the basis of the intensity of their need and the fit with the parts of the whole product you have assembled to date.

AR: 2. On the technology adoption life cycle where do you think Big Data is right now? What key events are expected in next 2-3 years?

GM: Big Data is still before the chasm. The market is being driven by early adopters who are funding big projects with very ambitious intentions.  There is still a lot of reusable whole product to build out.

I think that Big Data will cross the chasm as early as next year,

however, because certain segments are under enormous pressure to adopt it, largely because they are fighting competitors who are using Big Data to take away their whole customer base.  Everyone saw what Amazon did to Borders, and no one wants that to happen to them.

AR: 3. You mentioned that the Critical Success Factor during the pre-chasm phase is accomplishing breakthrough projects with top-tier brands. While this sounds absolutely logical, this might not be easy for entrepreneurs with minimal resources but a great product. Does this mean that the "barriers to entry" are high?

GM: In a complex systems marketplace, the early market is not about having a minimum viable product.  There is just too much else required.  Instead it is about having a breakthrough piece of technology that you bring to projects and put your entire team in service to one customer to productize enough of the whole product to solve for one specific use case.  Even if you think you are a product company, at this stage you are a project company by necessity.  And on that basis large clients are willing to work with small start-ups because effectively they are buying the team.

AR: 4. You talk to a lot of industry leaders on a regular basis. How do you think Big Data is being perceived by them? What are their biggest concerns regarding scaling up their investment in Big Data?

GM: Different industries are under different pressures when it comes to Big Data.  Financial services swallowed this pill a long time ago.  Telco has always been sitting on a big data goldmine although they have not always taken advantage of it.  The new kids on the block are digital media and advertising along with retail.  Retailers are particularly challenged because their profit margins do not allow them to spend on IT at the level that is required.

AR: 5. On a personal note, are there any good books that you’re reading lately, and would like to recommend?

GM: Actually, most of my reading is outside of business—a lot of fiction, with a sprinkling of science.  If you need a good 1500 page book, I recommend The Microbiology of the Cell!


Brief Bio: Geoffrey Moore is an author, speaker, and advisor who splits his consulting time between start-up companies in the Mohr Davidow portfolio and established high-tech enterprises, most recently including Salesforce, Microsoft, Intel, Box, Aruba, Cognizant, and Rackspace.

Moore’s life’s work has focused on the market dynamics surrounding disruptive innovations. His first book, Crossing the Chasm, focuses on the challenges start-up companies face transitioning from early adopting to mainstream customers. It has sold more than a million copies, and its third edition has been revised such that the majority of its examples and case studies reference companies come to prominence from the past decade. Moore’s most recent work, Escape Velocity, addresses the challenge large enterprises face when they seek to add a new line of business to their established portfolio. It has been the basis of much of his recent consulting.

Irish by heritage, Moore has yet to meet a microphone he didn’t like and gives between 50 and 80 speeches a year. One theme that has received a lot of attention recently is the transition in enterprise IT investment focus from Systems of Record to Systems of Engagement. This is driving the deployment of a new cloud infrastructure to complement the legacy client-server stack, creating massive markets for a next generation of tech industry leaders.

Moore has a bachelors in American literature from Stanford University and a PhD in English literature from the University of Washington. After teaching English for four years at Olivet College, he came back to the Bay Area with his wife and family and began a career in high tech as a training specialist. Over time he transitioned first into sales and then into marketing, finally finding his niche in marketing consulting, working first at Regis McKenna Inc, then with the three firms he helped found: The Chasm Group, Chasm Institute, and TCG Advisors. Today he is chairman emeritus of all three.