Beyond the Science of Data Science

The difference between what is required being a successful analytics consultant and what is taught in school.

Few days back, I saw posts by Gregory Piatetsky on salaries given to data scientists. Given the higher salaries quoted (for US!), few young grads mailed me to inquire about data science and how they can jump into this area. I am not sure if I can call myself data scientist given that I don’t tick all boxes required for being a data scientist, I tried giving them a 101 and advised them some post-grad courses to consider.

While I showed them these courses, I felt that I was not giving them the full picture. There’s much more that goes in to becoming a successful analytics consultant and most of it is never taught in any school. This other half which can make you win or lose the battle is what I am going to touch upon next.

Recently I presented a paper at ARF Re:think 2014. It is one of the influential American conferences catering to advertisers & market researchers. My paper talked about using network mapping and text mining on Facebook brand pages. For those interested, download the paper from the link: https://app.box.com/s/pu2vmeswmlgitntox91w. This paper had loads of network maps like the one given below. 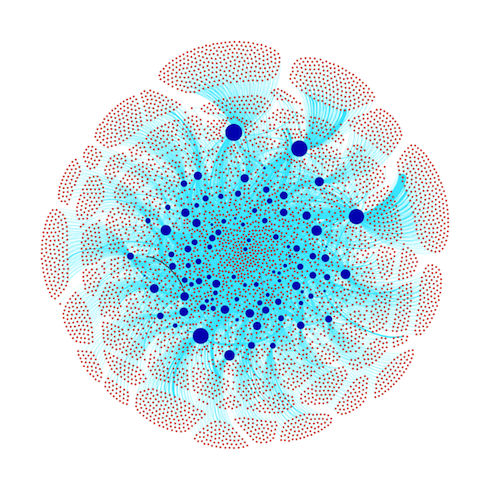 Just looking at it, incites people to admire its beauty! But then everything goes blank! Creating such network maps requires decent level of knowledge in graph theory but that’s only half the battle. Explaining what it means and how it can be used by a marketer is the most difficult part of the battle. Majority think the first part (creating network maps & analyzing) is difficult but I have often seen that that’s where majority of data scientists get mistaken. For people who work on graph theory, network maps are simple to decipher but that’s not the case for majority of people whom you are showing these graphs.

Most of my clients have never seen such kind of maps. Hence getting them to understand what these mean in the simplest non-jargony way is the most important part of my role. If your stakeholders do not get the gist of what these maps show they are not going to be able to understand your findings. If they don’t understand your findings, they will not be in a position to appreciate your suggestions based on these findings. Given that they don’t appreciate your suggestions, there is a very less probability that your work will be able to garner any results. Hence no matter how good or robust your technique might have been, it’s of no use if you cannot get your stakeholders understand your complex analysis in the simplest possible manner.

Another thing that often bugs me is called the fear of new. Lot of times when people see something new which challenges the old set of methods, they turn apprehensive to the extent of rejecting it. Most of the techniques that data scientists pursue are seen in similar lights of apprehension. Though there is a lot of literature on dealing with such scenarios, I would just say that it’s very important that your stakeholders see an advantage from the change you are bringing in. It’s very important to explain why you are doing what you are doing and why it can’t be done using existing techniques. Last but not the least, data scientists should also be well versed in finding passage for their suggestions by methods not limited only to logical explanations. There’s always a human angle to every conversations that most scientists neglect.

No matter how good your methods or algorithms are, if you can’t get it accepted across stakeholders, your entire effort goes in vain. In the race to finish, it’s often the last mile that matters the most.

Preriit Souda is a Senior Analyst-Marketing Science (Advanced Analytics) at TNS (A WPP Company). The views expressed are solely personal and do not reflect views of his employer or associated companies.