We analyze Top 30 LinkedIn Groups for Analytics, Big Data, Data Mining, and Data Science. Overall activity drops about 25%, but membership growth accelerates in Q4 2013. We identify 4 group quadrants and find which groups are fastest growing and most active.

The Figure 1 (below) shows quarterly growth rates in top 30 groups. Except for two groups: Machine Learning and SAS & Analytics Users (not shown in Figure 1) which had big growth in 1 or 2 quarters and none in 2 other quarters, most groups show surprisingly similar pattern of decline in growth in 13Q3, followed by acceleration in 14Q1 and 14Q2. 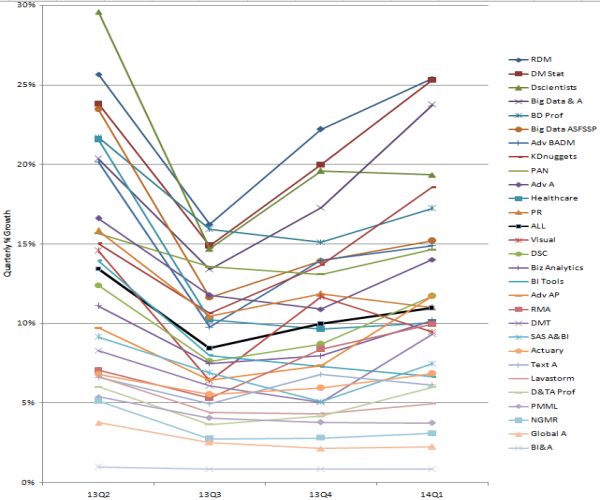 Here are the 10 largest groups (by membership as of March 31, 2014). We note that 7 largest were in the same order as in Nov 2013. The 6 largest grew significantly faster than the next 4 groups.

However, there seems to be no strong correlation between group size and growth rate among all 30 groups.

The chart below shows group growth vs group size. Color corresponds to age - redder is younger, bluer is older. Group name abbreviations are in the table below. 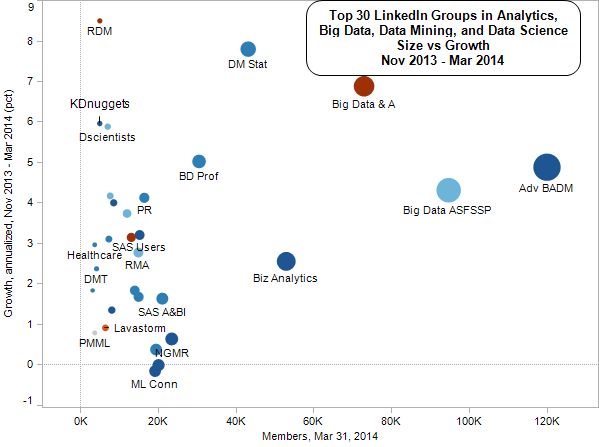 The chart below shows group activity vs group size. Color corresponds to age - redder is younger, bluer is older. Group name abbreviations are in the table below. 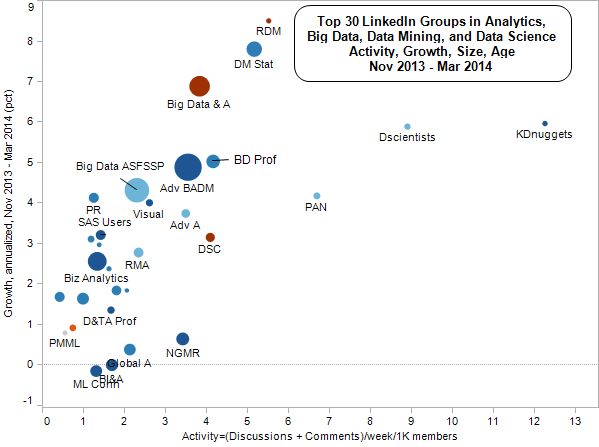 The chart below shows average comments/week vs average discussions/week for all 30 groups, with a circle size proportional to group size and circle color corresponding to activity change - green meaning increase, red decrease. We also show median lines for each dimension, which can be used to divide the groups in 4 quadrants. 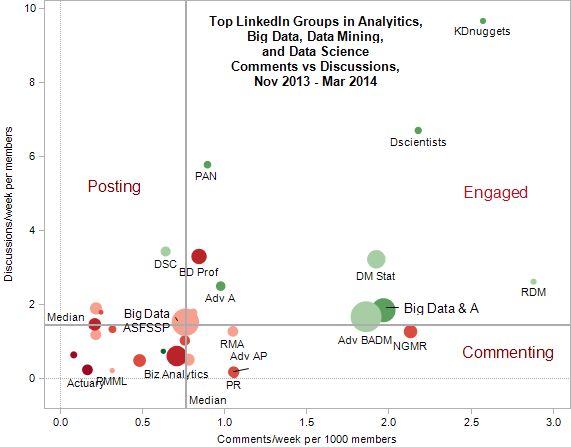 Several groups stand out: KDnuggets has the highest number of discussions/1000 members, while RDM has a highest number of comments. The median line divide the groups in 4 quadrants, which we can characterize as

The details are in the table with below, with groups ordered by the number of members. The link to the raw data is at the end of the post.

Note: You can get actual data from the HTML source code of the LinkedIn group Statistics/Activity page.

Look for dataset seriesName="Comments" and parse that data. Likewise for Discussions and Members.

Thanks to Anmol Rajpurohit for collecting the membership, comments, and discussions data.

Here is raw data (csv) for the top 30 LinkedIn groups.

Let me know which relevant groups were missed and what other trends you see.