Predictive analytics will become more powerful in industry as the data that computers collect and analyze in consumer and manufacturing contexts becomes more numerous.

The number of computing devices has far exceeded the number of humans on this planet – this milestone was in fact achieved back in 2008. Today there are an estimated 3 processors for every person in the world. Which devices in common use today use the most processors and computing power? The answer – the automobile - may surprise many people. The average car has anywhere between 50-60 microprocessors which handle everything from entertainment systems and climate control to performing advanced engine diagnostics and airbags during crash safety.

With mobile becoming an integral part of our daily lives, the information processed by these devices becomes useful not only to the manufacturers, but also to consumers. Data from a large and growing number of embedded processors can be used in a variety of ways: at the driver level to select a more personalized, convenient and efficient mode of driving, at a macroscopic (e.g. traffic) level, information collected in this way then can be consolidated to find solutions to problems like traffic jams, helping to improve the flow of traffic should city officials want to leverage this data as well. From a manufacturing perspective, close attention to fine grain data can significantly improve vehicle quality, by potentially reducing warranty and recall issues. The U.S. government has dedicated significant research to this effort and Dr. Thomas Klier of the Federal Reserve of Chicago will be keynoting on this topic at the upcoming PAW-Manufacturing conference. 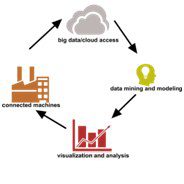 This story is repeated across other non-consumer applications, particularly on the shop floor, from small contract manufacturers to the largest original equipment manufacturers of the industry. For example, one small company is using overhead GPS sensors to carefully account for the activities of their assembly line workers. How much time is spent by worker #1 on project #2 which requires inspection versus project #1 which requires assembly? The data generated by the sensors is captured and processed in near real time to predict machine usage, unexpected delays and downtimes and improve overall process efficiency.

Once again, the chief output of this connected network is high quality data in huge volumes, which needs to be converted into useful data products. As Surendra Reddy, another keynote speaker from PAW-Mfg says “We are moving away from just creating and accessing data to more intimate, automated, knowledgeable, actionable insights about everything. This allows us to improve machine performance and the efficiency of the systems and networks that link them. As the devices and environments around us become aware and intelligent, they will play a key role in making decisions for us or nudging us toward specific actions”.

Historically manufacturing has been no stranger to either data or analytics. Statistical quality control, operations research and related technologies such as six sigma, all originated in manufacturing and could be considered the predecessors of today’s predictive analytics. However much has changed since these technologies became standards. Our ability to collect far more data and in real time has increased significantly. W. David Stephenson, who is another keynote speaker at PAW-Mfg, writes that this upcoming data avalanche from the connected internet of things in a manufacturing plant can transform precision manufacturing by being able to “…do things that were impossible in the past […] such as identifying and removing defective products while they are still on the conveyor belt. As a result, we had to rely on approximations, such as mean time to failure and scheduled maintenance that inflated costs and often missed outlier conditions that might lead to premature failure”.

The goal of PAW-Mfg is to help tie the advances in big data, analytics and visualization to persistent issues to drive orders of magnitude improvements in manufacturing performance and to prepare an “elder statesman” of industry verticals for a connected and data driven future.

Bio: Bala Deshpande is the co-chair of the inaugural Predictive Analytics World – Manufacturing conference. He is the founder and principal at SimaFore, a custom analytics developer and consulting company. He has nearly two decades of experience in data analytics and related fields. He began his career as an engineering consultant, following which he spent nearly a decade analyzing data from automobile crash tests and helping to build safer cars at Ford Motor Company. He holds a PhD in Bioengineering from Carnegie Mellon and an MBA from Ross School of Business (Michigan).