We summarize the key findings in the recently released US Open Data Action Plan, highlighting the principles, commitments, datasets released and future outlook. 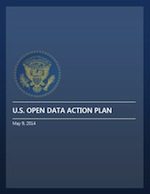 The US Open Data Action Plan, which was originally due last November, was finally released on May 9, 2014, the one year anniversary of President Barack Obama’s executive order to open up more government data.

The 2013 Open Data Census, run by the Open knowledge Foundation, had identified US as the world leader, followed by UK, with regards to open data and transparency. The census measured the openness of data in ten key areas including those essential for transparency and accountability (such as election results), and those vital for providing critical services to citizens (such as transport timetables).

To help with the fourth commitment, US Government will recruit a third round of Presidential Innovation Fellows to work on a series of Data Innovation projects. These projects include both open data initiatives and “My Data” initiatives. “My Data” initiatives, such as the Blue Button (for healthcare) and Green Button (for energy usage), are designed to give Americans secure electronic access to their own personal data.

Here is a list of selected data that has been released so far:

These datasets are being made available on federal agency websites as well as on the federal open data repository, Data.gov, which celebrated its fifth anniversary a few weeks ago. More than 100,000 datasets are available for download on Data.gov (http://catalog.data.gov/dataset). Moreover, some of the datasets are also available in an interactive form where you can perform basic analytical (such as filter, sort) and visualization (such as map, chart) operations online (https://explore.data.gov/catalog/next-gen).

Besides releasing data, the White House has developed Project Open Data – a collection of code, tools, and case studies – to help agencies adopt the Open Data Policy and unlock the potential of government data. Project Open Data is planned to evolve over time as a community resource to facilitate broader adoption of open data practices in government. Anyone can use these tools and contribute to them.

Despite push from the President, it still remains unclear how readily the open data by default standard will be implemented by federal agencies. The delays have already come up due to the government shut down and it seems most likely, that the release of all non-classified data online will be a gradual process. Of course, the concerns such as privacy and security cannot be ignored and thus, while this data has been released in public interest, government agencies and regulatory bodies will have to stay alert on any potential misuse.

In recent times, we have witnessed a plethora of Analytics startups with many more launching every month. The Open Data provides a great opportunity for these startups to prove themselves while working on real-life data and developing innovative solutions.

Though this is just the first step, if followed with commitment this journey can undoubtedly lead to greater government transparency and greater public participation (and trust), while generating new business opportunities through innovation.

The complete PDF of the US Open Data Action Plan can be accessed at: www.whitehouse.gov/sites/default/files/microsites/ostp/us_open_data_action
_plan.pdf