We examine CRN top 50 Emerging Big Data Vendors, with 65% located in Silicon Valley. The prototypical company is located in San Francisco and develops software for Hadoop analytics platform. Competition will be tough!

The CRN 50 Emerging Big Data Vendors includes companies from the infrastructure, business analytics, and data management lists that are up-and-coming.

Since these companies were chosen to be those that are showing great promise for their relatively young age (the oldest company on this list was founded in 2008), their average age is very young (<4 years).

These companies come from a variety of different backgrounds; some of them handle the infrastructure side of big data (e.g. Pivotal and Xplenty) while others are focused more on business analytics (e.g. Alpine Data Labs and Numerify).

Below is the word cloud from the companies descriptions, with most common words - data, CA, Hadoop, software, develops, analytics, and platform. Thus the prototypical emerging Big Data company is located in San Francisco, CA and develops software for Hadoop analytics platform. Competition will be tough. 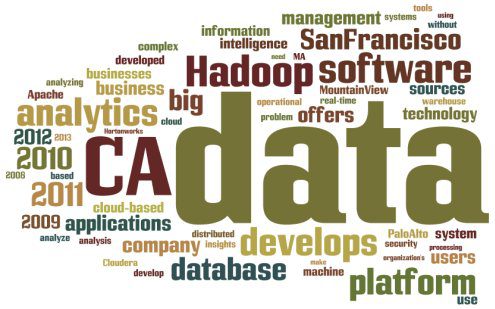