A profile of KDnuggets, including an overview, history, and present highlights, is featured on the homepage of INFORMS, a major society for Analytics and Optimization (until June 23, 2014). 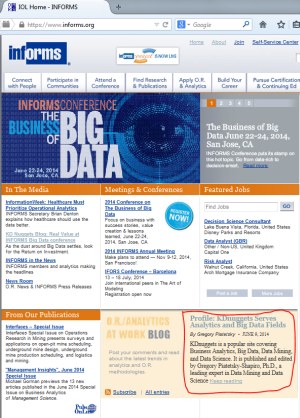 With over 11,000 members, INFORMS has a significant audience, and so I was very pleased that INFORMS has featured my profile of KDnuggets on its homepage www.informs.org/, in OR/Analytics at Work Blog (orange box). The profile will be on the homepage from June 9 to 23, 2014, and the direct link is Profile: KDnuggets Serves Analytics and Big Data Fields.

Here is the profile, with an overview of KDnuggets present, history, and highlights.

The chart below shows growth of KDnuggets audience, which more than tripled from 2010 to 2014. 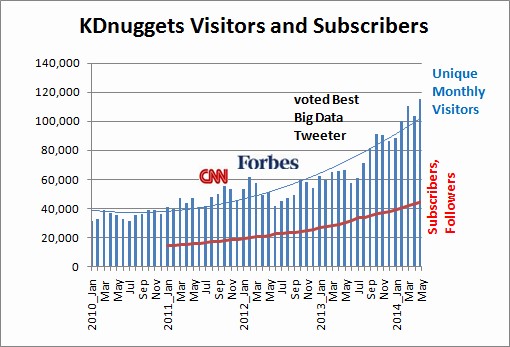 KDnuggets newsletter is emailed 2-3 times a month to all the subscribers.

KDnuggets News, published since 1993, is a unique mirror of the history and present state of predictive analytics, data mining, and data science field.

All KDnuggets News issues from the very first one are available online at www.kdnuggets.com/news/archive.html

The most recent posts are at www.kdnuggets.com/news/

KDnuggets was started by Gregory Piatetsky-Shapiro in 1993 as a way to connect researchers attending the KDD-93 workshop on Knowledge Discovery and Data Mining (organized by Gregory and others at AAAI-93 in Washington, DC).

With the appearance of World Wide Web and Mosaic, Gregory Piatetsky-Shapiro and Chris Matheus have created a website called Knowledge Discovery Mine hosted at GTE Labs (info.gte.com/~kdd site no longer active), which was at the time the second site in the world covering data mining and knowledge discovery field.

While Gregory was at GTE Labs, the newsletter was published as "Knowledge Discovery Nuggets". It served as an unofficial publication of KDD workshops (started by Gregory Piatetsky-Shapiro in 1989), and helped them to grow and become conferences. 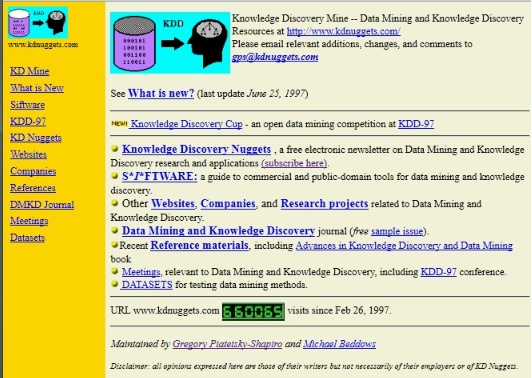 When Gregory left GTE Labs in 1997, he created KDnuggets site, with "KDnuggets" standing for Knowledge Discovery nuggets, (conveying the mission of covering the field with short, concise "nuggets" of useful information), and moved the Knowledge Discovery Mine to www.kdnuggets.com

Gregory was working from 1997 to 2000 as a Chief Scientist for Knowledge Stream Partners (KSP), which were providing data mining and customer analytics consulting to major banks and financial institutions, and editing KDnuggets late at night after work.

When Y2K crisis caused most of KSP to freeze any future projects (including any data mining projects), KSP lost most of its revenue and and cut salaries and work hours for all employees, including Gregory. The extra time and reduced salary motivated Gregory to put the first ads to support his work on KDnuggets.

KSP was acquired by Xchange in April 2000, and Gregory worked for Xchange for about a year as a Chief Scientist, Analytics. During that time Xchange market value reached $1B (briefly), and then fell almost to zero. Gregory left Xchange in May 2001, during the collapse of the dot com bubble, and has been publishing KDnuggets as an ad-supported site since then.

KDnuggets website includes a directory of main areas of data mining and data science, including

A popular feature of KDnuggets is Polls, especially the annual software poll asking "Which Analytics, Big Data, Data mining, Data Science software you used in the past 12 months?".

Here are the results of the latest 2014 KDnuggets Analytics/Data Mining Software Poll.

Another popular feature is Cartoons, which take a humorous look at Data Mining and Data Science.

Data Scientist: "Sweetheart, my neural net predicts that you and I are 98.9% compatible. Will you be my Valentine?"

KDnuggets also offers a free Data Mining Course - the teaching modules for a one-semester introductory course on Data Mining, suitable for advanced undergraduates or first-year graduate students. The course, created by Gregory Piatetsky-Shapiro and Prof. Gary Parker, was funded by a grant from W. M. Keck Foundation and Howard Hughes Medical Institute, and is freely available on the web.

In November 2009, KDnuggets added blog-style, daily publication and switched to a custom PHP-style platform that Gregory wrote. With the continued growth in visitors and popularity, KDnuggets converted most directory and news pages from 2013 forward to WordPress and switched to publishing using WordPress platform in Jan 2014.

In Feb 2009, Gregory also added a @KDnuggets Twitter, and later also a Facebook page , and a LinkedIn group.

KDnuggets.com and @KDnuggets Twitter have received wide industry recognition, including:

Whether the #BigData buzzword will stay or be replaced, the amount of data in the world will only grow, and so will the demand for people who can understand this data. That is the audience KDnuggets addresses, so the future looks bright.