Data Scientists and Data Analysts have a number of skills unique to their positions, with analysts focusing more on creating business value and data scientists including simulation and optimization in their jobs.

While fashion is usually not a high priority for data professionals, it is true that the terms used to describe the work that they seem to have changed in the last few years.  Data Science has caught the most attention these days. Many say they are seeing something groundbreaking, but the more jaded observers see a clever twist on an old standard. So what exactly is Data Science and can an analyst, who simply does analytics, accessorize their current outfit to turn heads? Is it any different than data mining?

The problem is that the term has a mystique where its features are hard to distinguish from the crowded taxonomy of different data terms.  This revisionism is commonplace in many fields, but particularly in the fast growing data science field. I know many colleagues who re-branded themselves as data scientists in order to be more attractive in the market. They would argue that an analyst make reports while a data scientist makes visualizations, even if both have the exact same content.

There are a slew of other terms that get lumped in these categories and cause confusion when talking about statistics, business intelligence or data science, but none more elusive than the most nebulous of terms – Analytics.

The graphic below is an effort to help bring clarity to the analytics domain and helps develop a simple glossary for us to frame the actual work being performed. 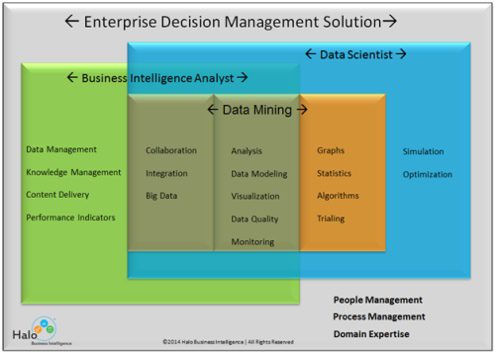 The overlaps between business intelligence and data science are significant. In fact, a small majority of tasks and vast majority of labor are spent in tasks that are shared between the two related disciplines.

Here are some additional comments on the Infographic:

While this graphic may not be enough to update your title from “analyst” or “business intelligence developer” to “data scientist” (though you would not be the first), it certainly helps give boundaries to very elusive labels.

Ray Major is the Chief Strategist of Halo Business Intelligence. A data scientist, economist and statistician by training, he’s a life-long practitioner in the mysterious arts of data intelligence and analytics. You can contact Ray by email at majorbi@halobi.com and also follow him on Twitter at @majorbi