Highlights from the presentations by Market Research leaders from H(app)athon Project, Socratic Technologies, TNS, PepsiCo on day 1 of Future of Consumer Intelligence 2014 in Los Angeles.


Understanding PEOPLE (i.e. not shoppers, not consumers, not respondents) - but people - across platforms and touch-points in an increasingly interconnected world threaded together with always-on technology, presents an opportunity for us to know people more deeply - and take strategic action.

Technology is the central driving force amongst the foremost mega and macro trends across industries. It's advancing at such a rapid pace it is not only changing how we do things but changing how we understand the world, business, and people. 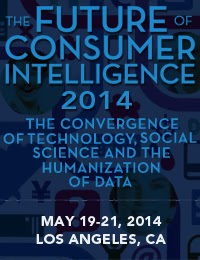 Future of Consumer Intelligence 2014 (May 19-21, 2014) at Los Angeles explored the emerging role of decision science and the convergence of knowledge points - insights, foresights, social science, marketing science and intelligence with technology a central driving force and profound connector.  This year's theme was "Technology and the Humanization of Data: Synthesizing Insights, Analytics and Relational Database Strategy."

This event was about accelerating disruptive innovators in the research space and pushing people to take risks to think outside of traditional research methods and insights gathering end explore new tools and technologies.

We provide here a summary of selected talks along with the key takeaways.

John Havens, Founder, The H(app)athon Project, and Author, “Hacking H(app)iness: Why Your Personal Data Counts and how Tracking it can Change the World” gave a talk titled “Hacking H(app)iness – How to Give Big Data a Direction”. He insisted that if one wants to understand people, it would be helpful to think about them the way they think about themselves, but people do not think of themselves as “consumers”.

He admonished the audience to stop calling people consumers. The term “consumer” objectifies and reduces people to a single dimension. Havens explained that a shiny new Lexus may make one happy, but it’s a fleeting sort of happy (known as “hedonic”) and when it fades we’re left searching for something else to fill the void. Consumption as a happiness engine has left people feeling empty. People want purpose and meaning, to feel a part of something bigger than themselves. And they want the brands and companies they patronize to not just reflect their values and to care about the things that really matter—family, community, people, the planet— but to walk the talk.

Dr. Bill MacElroy, Chairman, Socratic Technologies talked about “Progress in the Adoption of Innovations for Consumer Intelligence”. He shared findings from research conducted by Socratic Technologies along with Institute for International Research (IIR) into the research industry’s tendency towards innovation. Talking about innovation adoption orientation, he mentioned that only 6% of companies in market research are innovators.

Innovation adoption is motivated by quality and efficiency improvements and not by cost reduction. Cost and stakeholder acceptance are the biggest innovation barriers. Only 4% of researchers cited “new and better insights” as an innovation driver. “Fear is a problem,” he explained. “And fear is a great way to kill any new idea. Since the economic downturn, there’s been a lot of defaulting to ‘good enough.’” “People are also afraid of how introducing a new capability might affect their organizational structure. Where will this new intelligence function or capability sit?” MacElroy added.

Dr. Larry Friedman, Chief Research Officer, TNS delivered his talk on “Building a Social Spine in Tracking Research”. Survey-based tracking research has come under severe criticism in the past few years, for being too slow, too expensive, and too backward-looking.  By making use of various forms of new, passively collected data – including social media data and search data – and integrating them with quick, flexible surveys, one can renew tracking research, turning it into a valuable management tool.

Even if traditional trackers were reasonably predictive—which Friedman noted they are not—they would still be too cumbersome in their conventional form to suit the pace of change today. It’s like trying to turn an ocean liner when what’s called for is a speedboat.  Friedman’s answer to both the speed and predictability problems: social media. “We can build things that are more predictive using passively collected data than we ever were able to using survey data,” he said. Friedman provided several examples from new trackers with social spines—a number of which TNS is co-creating with clients—that appear to be quite predictive.

Manoj Fenelon, Director of Foresight, PepsiCo gave an interesting talk titled “The Consumer Is No More. Long Live The People: Moving from Consumer Understanding to Empathy”. He emphasized that as role of brands is changing, the role of research must change consequently. He said “People are turning less and less to brands to define themselves or as guides to identity,”. He added “Experience and the creation of meaning are also no longer the jobs of brands.”

He recommended all researchers to read “The Zero Marginal Cost Society: The Internet of Things, the Collaborative Commons, and the Eclipse of Capitalism” by Jeremy Rifkin. He also cited a great quote by neuroscientist Antonio Damasio: “We aren't thinking machines. We are feeling machines that happen to think.” He emphasized that “It’s a complete myth that to know what people are thinking is to understand them.” He asked the researchers to forget these terms: “aspirational, understanding, research” and replace them by “useful, empathy and dialogue” in order to facilitate connections between brands and people.