Why analysts should master public speaking

Learn how to advance your career and increase the adoption of your analysis by conveying your message more clearly using public speaking experience. 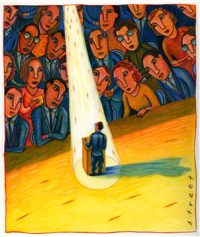 Granted, the fear of public speaking is often considered the most common of all phobias. In some (non-scientific) studies, evidence suggests that people fear public speaking more than death itself. It is not unlikely that analysts fear public speaking even more – as they are often distinctly more introverted than your average Joe. As with death, the natural human reflex is to avoid such fearful events. But this natural reaction is probably not the most fruitful, for two major reasons.

1 – Increased adoption. In our projects, the most frustrating experiences for analysts were created when the results of the analysis were not adopted. Analysts often give their heart and soul in analyzing complex matters. They often spend much less mental energy in trying to ‘sell’ the results of their work. In general, however, analysts really care about their work being used and being useful – hence they should care about maximizing the odds of adoption of their work within the organization. This often implies stepping away from the formulae and the data and translating the results of complex procedures into intuitively acceptable results. In order to present a research project successfully to non-experts, public speaking skills play a major role.

2 – Career development. Today, there is an interesting lack of clarity into the ‘natural’ career path for analysts. In our network, we’ve seen it all: analysts who become managers of analytical teams (who are suddenly challenged on the core competencies needed to fulfill their new role), analysts who become managers of other teams, and analysts who will eternally remain analysts. In a reality where people are ‘encouraged’ to work longer, one needs to ask the crucial question: will I remain forever happy as an analyst? A lack of public speaking skills has been considered a major factor holding people back from success in general - and this is probably not much different for analysts.

The solution? There is one way to learn public speaking, and that is by doing. Practice makes perfect. And even if I still often feel the urge to flee the five minutes before I have to step into the spotlight, I set the target for myself to present at least twice a year in front of an unknown crowd in order to work on my (public) speaking skills. Working to transform the facts and figures into a story that makes sense both to experts and non-experts is one of the most rewarding tasks for an analyst – if one dares to take a (calculated) risk. But I’m guaranteed to walk away stronger, with more experience, and often valuable feedback to enhance my future presentations for clients and colleagues.

Need practice? There’s an excellent upcoming opportunity: Predictive Analytics World London is still looking for speakers (analysts and their managers) for their next event, October 29 & 30 in London. Additional details on www.pawcon.com/london