Students from ten top tech universities now have access to Watson. For students at New York University interested in Watson, Capstone Project Course would be their first choice.

By putting Watson in the hands of academic experts and talented students, IBM may move the cognitive era forward faster. Students registered for these courses will have access to IBM Watson through the Watson Developer Cloud. They will work in teams to develop cognitive applications, and the winning entry will be awarded $100,000 in seed funding from IBM.

I recently had a talk with Professor David K A Mordecai, who is the director of the Capstone Project Course at NYUCDS, and to his Co-Instructor Professor Michael O’Neil to better understand how NYU will engage in the IBM
Watson Academic Challenge. 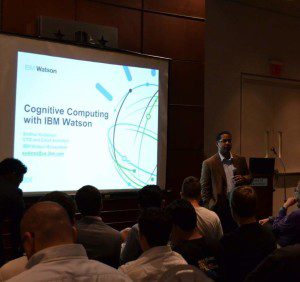 Capstone Project Course to start with.

Watson will be offered a part of the NYU CDS Capstone Project Course in Data Science Program at NYU. In this course, students will engage in the entire process of solving a real-world data science projects sponsored by faculty, industry, or governmental research groups.

The NYU CDS Capstone Course will primarily involve thirty Masters of Data Science (MSDS) students for whom acceptable completion of a capstone project is a degree requirement, with an additional fifteen other spaces being offered for graduate students and advanced undergraduates from across the university. Professor Mordecai considers this expanded enrollment of additional slots to be an interesting opportunity for any suitably qualified student who would like to engage with Watson and potentially enter the challenge.

Students participating in the course can choose to upload their data set and take advantage of the Watson cognitive computing capability. After the Capstone Course, those students who have opted to do so will have the opportunity to submit their project as an entry the IBM Watson Challenge. To put it another way, if any student at NYU wants enter the Watson Challenge to compete for the $100,000 award of seed funding being offered by IBM, in order to access Watson, IBM requires the student to register for the course.

The Watson Challenge is neither a requirement nor the primary focus of the Capstone Course, but rather a supplemental activity for those NYU CDS MSDS students who register. Professors Mordecai and O’Neil, who will co-teach the Capstone Course with support from a highly qualified team of two PhDs, are working with many sponsoring companies and research groups, to propose project ideas and make available supporting data sets to student teams. The list sponsors will be publicly disclosed in early September.