What is Big Data – answers from thought leaders

What do you think when you hear “big data”? Maybe take a moment and think about this, before you let all the opinions below influence you.

The most famous definition of big data, originally given by Doug Laney in 2001, may be three Vs: high volume, high velocity, and high variety, which briefly tell us what “big” means. Recently Jenna Dutcher collected a bunch of responses to “What is Big Data”  from 40+ thought leaders. Here are a few interesting opinions from the list. 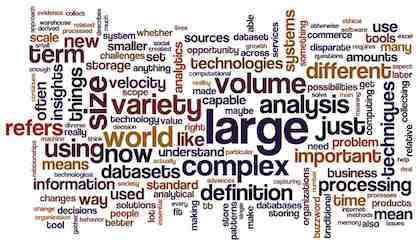 Some people think “big data” as a tool to better describe reality. With Data Visualization, it is much easier to understand what is happening.

You cannot give me too much data. I see big data as storytelling — whether it is through information graphics or other visual aids that explain it in a way that allows others to understand across sectors. I always push for the full scope of the data over averages and aggregations — and I like to go to the raw data because of the possibilities of things you can do with it.

Big Data is nothing more than a tool for capturing reality — just as newspaper reporting, photography and long-form journalism are. But it’s an exciting tool, because it holds the potential of capturing reality in some clearer and more accurate ways than we have been able to do in the past.

Big Data is just the ability to gather information and query it in such a way that we are able to learn things about the world that were previously inaccessible to us.

Big Data, which started as a technological innovation in distributed computing, is now a cultural movement by which we continue to discover how humanity interacts with the world — and each other — at large-scale.

Some people make decisions with the help of “big data”. Prediction is the primary goal.

Historically, most decisions — political, military, business, and personal — have been made by brains which have unpredictable logic and operate on subjective experiential evidence. “Big data” represents a cultural shift in which more and more decisions are made by algorithms with transparent logic, operating on documented immutable evidence. I think “Big” refers more to the pervasive nature of this change than to any particular amount of data.

Big data: Endless possibilities or cradle-to-grave shackles, depending upon the political, ethical, and legal choices we make.

The best definition I saw is, “Data is big when data size becomes part of the problem.” However this refers to the size only. Now the buzzword “Big Data” refers to the new data-driven paradigm of business, science and technology, where the huge data size and scope enables better and new services, products, and platforms.#BigData also generates a lot of hype and will probably be replaced by a new buzzword, like “Internet of Things,” but “big data”-enabled services companies, like Google, Facebook, Amazon, location services, personalized/precision medicine, and many more will remain and prosper.

People are always willing to understand the present and seize the future. Big data has been proved useful in both ways. Besides, “Big Data” sounds really cool so that people start talking about it everywhere.

From what I see, as a student of data science, big data is not just about a fancy word. We have Facebook, Twitter, credit cards and even Applepay now. Data is everywhere, structured or unstructured, for us to analyze. Although most techniques are not recently created, big data still defines a new way attracting more people to discover the world.