Analyzing Ebola – Is it spreading at exponential rate?

We examine how fast Ebola actually spreads in West Africa, and find a very different situation in Liberia, Guinea, and Sierra Leone. Unfortunately, recently it does spread exponentially.

Ebola is a major global health threat in 2014, but how quickly does it spread? Various news organizations report that the number of cases is increasing exponentially, but there were only a few thousand cases (not millions like for flu), so I decided to investigate from primary data.

I found reports from

and extracted data for the 3 most affected countries - Guinea, Liberia, and Sierra Leone.

Of course, the reported numbers should be considered only a lower approximation, since reporting on Ebola is very difficult. The heroic health care workers in West Africa, who collect the data on the ground, face not only the disease (many have already died) but also attacks from scared villagers who think the health care workers spread Ebola. CDC estimates that for every case reported in publicly available case counts, an additional 1.5 cases are not recorded.

More advanced and geographic analysis is possible, as well as looking at lagged time series (since Ebola typically takes about 3 weeks to fully manifest itself), but even our initial analysis is quite illuminating.

First, we see that the disease progression is markedly different in the 3 affected countries. 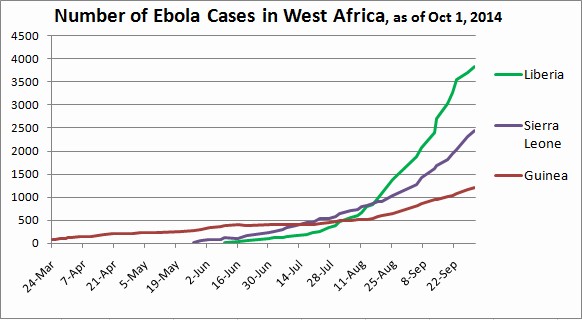 Ebola is clearly spreading the fastest in Liberia, where the number of cases has doubled in about last 25 days. In Sierra Leone, it took about 28 days.

In Guinea, where according to WHO, Ebola started in Dec 2013, we see the earliest cases. However, it seems that the growth rate is slowest there. In fact there was no growth in reported cases in Guinea during July 2-20, with the number of cases stuck at ~ 410, although perhaps this was due to faulty reporting. The growth in reported Ebola cases has resumed in late July, but slower than in the other 2 countries. Still the number of cases has doubled in the last 43 days.

Next graph shows the total number of deaths. Liberia is much harder hit than others. 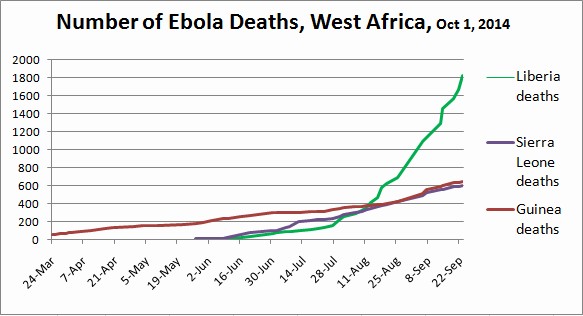 Finally, we look at the death rate, which again is markedly different - highest in Guinea, lowest in Sierra Leone. One hopeful sign is that % of death in Sierra Leone seems to be decreasing.

Here is the data in the table form.