Big Data boot camp (Sep 19-21, 2014) was organized by Global Big Data Conference at Los Angeles Convention Center. This 3 day event gave a fast paced, vendor agnostic, technical overview of the Big Data landscape. The participants included a good number of beginners, who had no prior knowledge of databases or programming. The event was targeted towards both technical and non-technical people who wish to understand the emerging world of Big Data, with a specific focus on Hadoop, NoSQL & Machine Learning. Along with the lectures, attendees got first hand practical experience of implementing and using real Hadoop clusters and the latest Hadoop distributions.

Here is a brief summary of the class on “Big Data & Hadoop”:-

The event kicked off with introduction to Big Data. Sujee Maniyam from ElephantScale was the instructor. He mentioned that based on nature of data, data can either be human generated or machine generated. Although we are generating both kinds of data at a rapid pace, machine data has exploded in recent years. Lots of intelligence lies in big-data, such as user behavior. Therefore, all major online companies are following this mantra: “log everything and ask questions later”. The logs help in providing users with targeted ads, recommendations, etc. Describing data as the new “gold”, he suggested collecting as much data as possible and then applying analytics in different ways over it to generate profits. He briefly described big data challenges as: volume, variety and velocity. 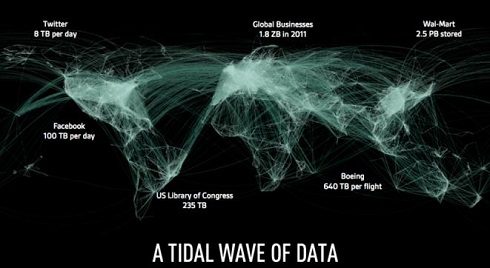 Hadoop is a software stack which runs on cluster of machines providing distributed storage and processing. Before Hadoop, parallel computing concept included storage and compute clouds as separate entities. Hadoop merged the

two by moving code to data. Talking about cost of storage, he mentioned that it has reduced significantly and it costs about 5 cents/GB these days. A modern disk can support about 150 MB/sec read speed i.e. reading 1 TB in just 2 hours. 10 GB of sequential data can be read in about 20 hours. How about 10 TB spread across 10 disks? Reading 10 disks of 10TB in parallel takes just 2 hrs, leading to IO throughput of 5GB/sec. Now, if we imagine 10 machines, each with 10 disks then we can read 100TB in 2 hours, leading to IO throughput of 50GB/sec. This is exactly how Hadoop scales.

Big Data in cloud is pretty popular among startups as there is no initial cost and they can pay per use. A click can create any sized cluster. However, Big Data in cloud has several challenges such as cost, security and getting data into cloud. Running a permanent hadoop cluster in the cloud can be costly. So, “Hadoop on demand” came as a solution.  The model works as following: spins up a cluster, processes data, shuts down the cluster and you can pay for usage.

Apache Whirr is an open source tool to easily manage clusters in the cloud. Hadoop has a large number of use cases: analyzing click stream data to optimize ad-serving, fraud detection, find influencers in Twitter sphere. Enterprises are now adopting Hadoop to get new insights and compliment their existing data-warehouse and processing. With the help of following image he described scaling and access time for various database technologies. 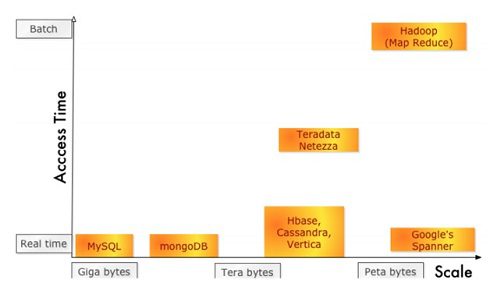 Technologies involved in Hadoop ETL can be classified as shown in following figure:

Maniyam summarized the lecture by mentioning that Hadoop is mainstream, solving very real and difficult problems; however, it is still making inroads into enterprises.