Data scientists from the Centre for Data Linkage at Curtin U. found that Connecticut-based firm Data Ladder has outperformed several major companies on record linkage.

DataMatch, the flagship software suite of

The study done by Curtin University provided results on the match accuracy of several data sets, spanning 40,000 to 4 million records. The match accuracy exceeded all other software tools, including both IBM's Infosphere QualityStage software as well as SAS Dataflux in all categories.

"Our team has been hard at work the last several years improving matching accuracy, so this is truly exciting news," said Nathan Krol, founder and CEO of Data Ladder. "At our price point, these types of tools - once only accessible to large companies with dedicated resources - are now accessible to a wide variety of organizations," he said.

Tests were completed on data provided by Centre for Data Linkage at Curtin University, Australia, and were done using Data Ladder's proprietary algorithms (no pre-processed algorithmic results were used.) The tests included: 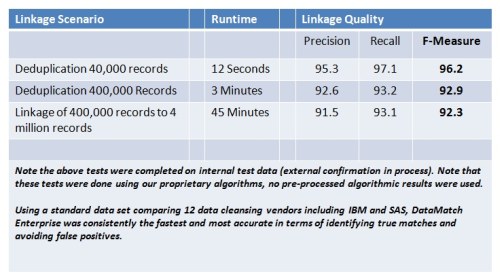 With the substantial growth in data and data linkage activities over the last several years, there has been increasing demand for independent assessment of performance and suitability of software tools. Evaluations for record linkage software had previously been based on past experiences of the user rather than on the objective, formal evaluation of available products. By being independently confirmed as the company with the highest match accuracy, Data Ladder is well poised for growth in the future.