We analyze latest Ebola data, examine the recent slowdown in growth of cases in Liberia, and analyze its likely causes. Many problems with data lend themselves to good data science lessons.


Ebola epidemic remains a major global health threat, and continues to increase rapidly. The top world epidemiologists and medical professionals are already examining the Ebola data from all angles, so my goal in this post is more to draw some data science lessons rather than to discover something new. Still, we do find new results on changes in Ebola death rate in Liberia and Sierra Leone, and the implications it has on the extend of undercounting of Ebola cases.

Ebola is presently an example of "small data" (let's hope it stays this way), but its data has many problems which lend themselves to useful lessons that can be applied to Big Data as well.

I have extracted the data for the 3 most affected countries (Guinea, Liberia, and Sierra Leone) from

The first lesson is to examine the data closely, since the report date is usually a few days later than "data" date, and the dates for each country sometimes differ. Thus we have to keep a separate date for each country data. Next figure shows the growth in the number of reported cases. 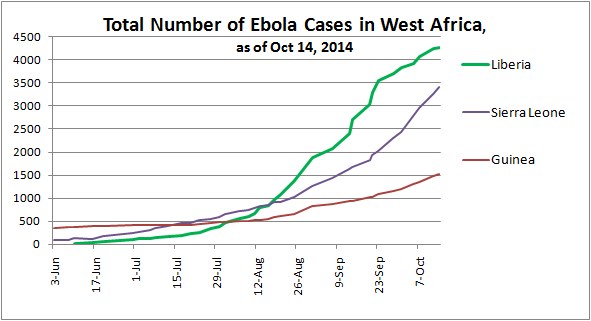 First observation we can make is that the growth in the number of reported cases in Liberia - the most affected country - has slowed down since the middle of September. 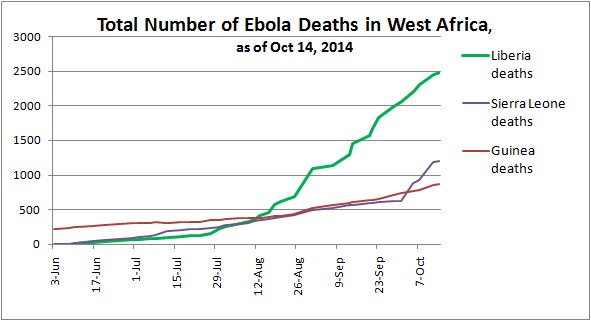 The grim figure 2 of the number of death does not show any slowdown in Liberia but shows a significant jump in Sierra Leone deaths, starting in late Sept.

Next, we examine Liberia in more details and look at the reported number of cases/day and number of deaths/day there. 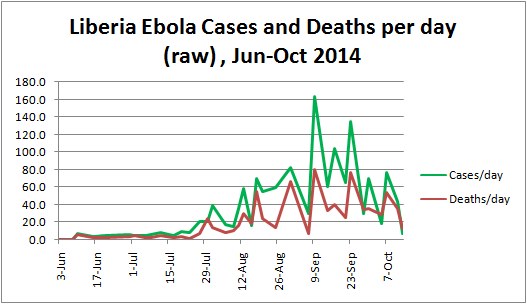 The raw data is very noisy, since the reports come at different intervals. Next idea is to "smooth" the data by examining changes at regular intervals, and weekly intervals is the next logical choice.

Since we see changing trends, having one global estimator will not work, even if we can fit a polynomial function to the total number of cases with R=0.987.

Instead, we will take the simplest approach and use local interpolation.

There is actual data for Liberia for Oct 7, Sep 30, and Sep 23 (all Tuesdays), but not for Sep 16. There is data for Sep 17 and Sep 9, so we can use these 2 points to estimate data for Sep 16. Since the number of cases appears to grow exponentially, we will not use linear extrapolation.

Instead we will take logarithms (which do look piecewise linear) and do a linear interpolation of logarithms. For example, to get the estimate for the log of cases for DateB between Date 1 and Date 2, we use

and then convert the log to the number of cases.

The following chart confirms that the estimated cases fit very nicely into the overall pattern. 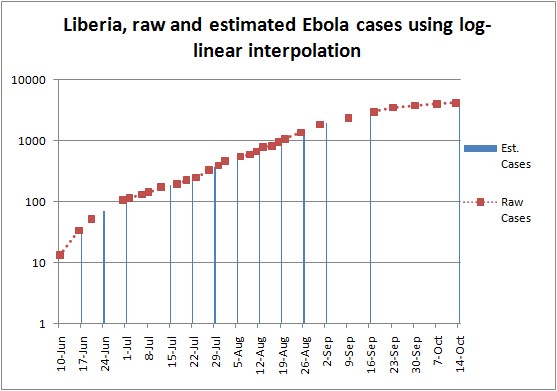 The Data Science Lesson here is the extra effort to estimate missing values is justified, if it results in a simpler model.

Now we can look at the data at weekly intervals, which are indicated on the X axis of Fig 4. 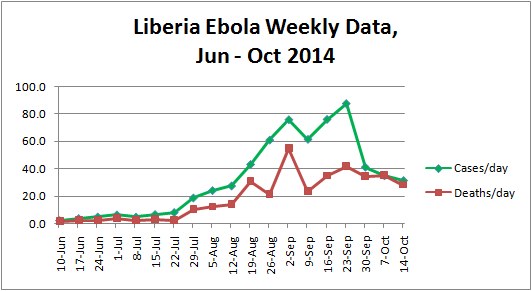 So the data science lesson here is to remember that data is only an approximation of the real world, and try to understand the process of data collection and measurement.

We can also do a similar analysis for Sierra Leone for July - October (in June the number of cases there was not reported reliably). 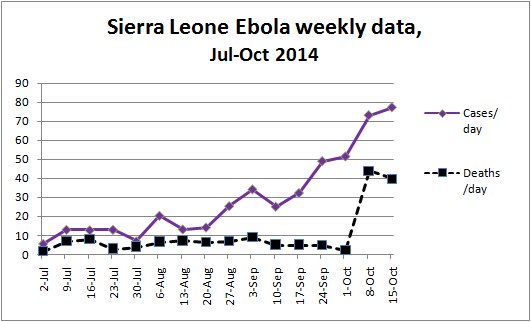 We note a continued growth in cases/day since Sep 10 and a sharp jump deaths/day in early October - perhaps sharpness of the jump is due to late reporting.

Next, we examine what is the Ebola death rate.

It was reported that the Ebola death rate has risen to 70%, but no supporting data was provided.

The death rate in some analyses I saw compared the number of cases diagnosed on day X with number of deaths reported on the same day. This, however, is incorrect, since it takes Ebola a number of days to kill its victims.

Wikipedia says death from Ebola usually occurs within 7 to 16 days . Thomas Eric Duncan, first Ebola patient diagnosed in the US, succumbed to Ebola in about 13 days after his first hospital visit. The treatment for Ebola victims in West Africa is certainly less advanced than what he received, so a reasonable range for death from Ebola is about 1-2 weeks from diagnosis.

So we can compute death rate with 1 week delay, by dividing death(date=X) with cases(date=X + 1 week), etc.

Next chart looks at Ebola death rate in Liberia with same day (under-estimate), 1 week, and 2 week delays. The chart does not show data before July 8, when there were less than 110 reported cases, which produced both 1 and 2-week death rates higher than 100% - suggesting significant undercount of initial cases. 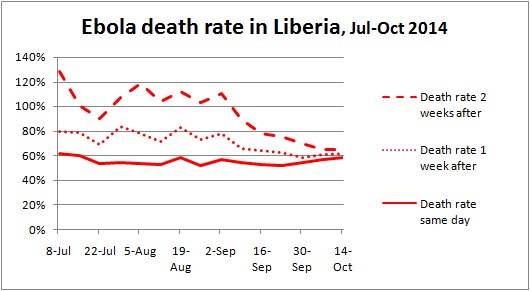 We see that with more cases, death rate converges to around 60-65%, with delay between 1 and 2 weeks.

Here is a similar chart for Sierra Leone death rate. 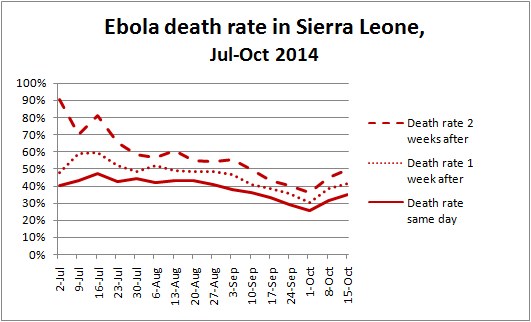 What can we infer about spread of Ebola from this data?

Not much, since we have not used additional sources of data, such as geo-location.

The Oct 15, 2014 report from WHO has a very good chart showing the latest geographic spread of Ebola by counties - see below. 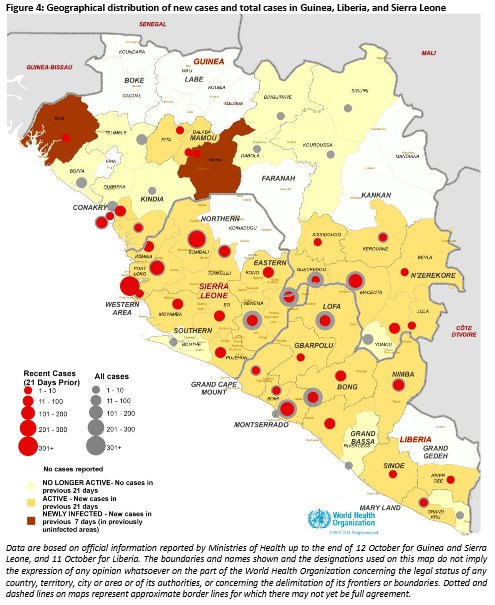 Fig 9. Geographical distribution of new cases and total cases in Guinea, Liberia, and Sierra Leone, as of Oct 12, 2014.

We can see where the disease grows faster. Data Science Lesson: Bring as many additional data sources as you can to get a better understanding of the problem.

What do you think about Ebola analysis and Data Science lessons?

Let me know in the comments below.

Here is Ebola cases and deaths data for West Africa, as of Oct 14 in CSV format.