A new comic from Al Jazeera simplifies the Big Data concepts and educates on the privacy concerns based on recent technology advancements.


While the technologists and business strategists are hustling in the Big Data hype, the common man is inundated by the overwhelming complexity of "whatever is 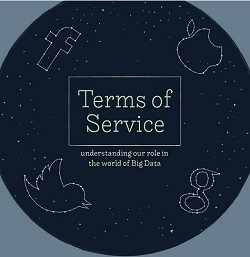 being referred to as 'Big Data'". Some are even worried that the privacy concerns due to Big Data could be one of the first indications that we are rapidly approaching the era, which so far existed only in our imagination, where machines will outsmart and overpower humans.

Put in simple terms, one can argue that people's understanding of current technology is following Moore's law, sadly in the reverse direction, i.e. in every six months, people's confusion about current technology doubles. People had hardly understood the concept of "cloud" and how it would impact their life, before being hit by the next tsunami - "Big Data". In light of the NSA revelations by Edward Snowden, some people have started to think of Big Data as "Big Brother" who is keeping an eye on everything you do, and it is almost impossible to hide anything from it, no matter how personal.

To add to users' pity, the "terms of service" and "user agreements", that are expected to clearly define the privacy aspects, have become more and more obscure. Moreover, they change so often, and given the pace of life, the user has no choice but to hit the "Agree" button without reading what one is signing up for.

Given the current situation, media can play a vital role in educating people and enabling them to confidently make smart decisions regarding current technology. By simplifying terms such as "Big Data", journalists can help people understand that people do have choices when it comes to technology and through some basic awareness, they can not only protect their data but also use the current technology to their benefit.

The recently published 46-page comic "Terms of Service" by Al Jazeera reporter Michael Keller and cartoonist Josh Neufeld is one of the shining stars in media's effort to educate public on Big Data. Using a very simple narrative and interesting visuals, they have done a great job at explaining the nuances of Big Data and the privacy concerns. It informs about the relevant events in the past and then carefully explains the current state; thereby, enlightening users on the not-so-talked-about dangers of Big Data. 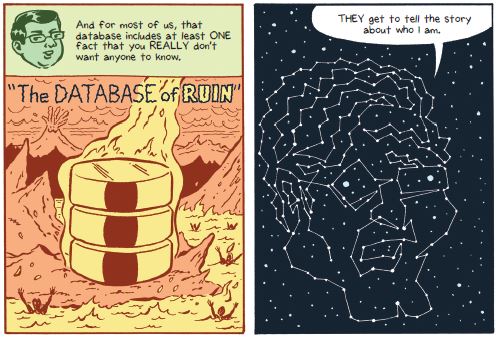 The comic also raises some very important questions about the emerging business models and their impact on people’s privacy. It is high time that people be cautious about the too-good-to-be-true offers and ensure that they fully understand the implications of an offer before signing up for it. 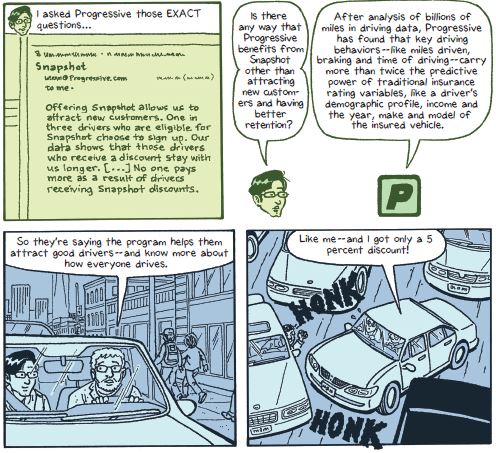 It also talks about the term “Internet of Things (IOT)” which is getting increasingly popular these days. While the companies mostly talk about the great benefits of these technologies to end user, one must not forget that there are some deep privacy concerns too, that need to be well evaluated before choosing to use this technology. 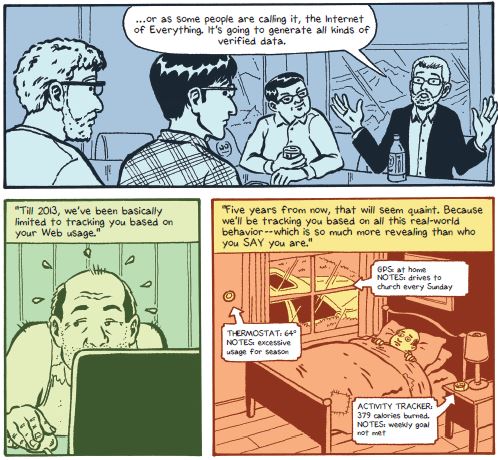 It candidly attacks the myth of "free" product or service, such as the very popular Gmail or Facebook. Then, it subtly explains the significant trade-off between (intangible) privacy and tangible benefits such as free service or discount. 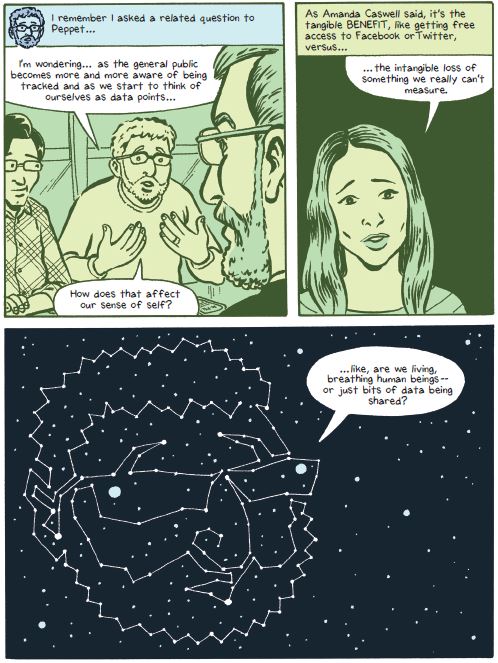 Overall, it’s a great piece of reporting. I wish it also outlined some potential solutions to the privacy concerns, which would have left the reader in a better (more calm!) state after reading the comic. Nevertheless, it does raise some very significant questions and by simplifying the complex concepts, enables people to participate in the discussion on Big Data & Privacy.

The complete comic is available for online reading (you may also download as PDF for offline reading) at: http://projects.aljazeera.com/2014/terms-of-service