Microsoft buys Revolution Analytics - I look at why this is both surprising and not.

I was both surprised and not surprised to learn that 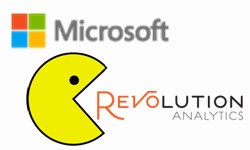 Smaller stand-alone analytics vendors find it increasingly hard to compete, and several have been acquired (SAP bought KXEN, Dell bought Statistica, ...), so Revolution Analytics acquisition is not a surprise.

I was surprised that Microsoft was the buyer, since Revolution Analytics is an open-source company.

Microsoft might seem like a strange bedfellow for an open-source company, but the company continues to make great strides in the open-source arena recently. Microsoft has embraced Linux as a fully-supported operating system on its Azure cloud service. (CEO Satya Nadella proclaimed "Microsoft loves Linux" in foot-high letters at a press event back in October.) Microsoft supports Hadoop with Azure HDInsight and has partnered with Hortonworks to extend open-source Hadoop for the enterprise.

Also, Microsoft has become a big user of R - for its Xbox gaming and especially Microsoft Azure Machine Learning platform. So perhaps this acquisition does make a lot of sense.

There are only a few standalone analytics vendors left, so watch out for more acquisitions.