Majority thinks Artificial Intelligence will not be a threat to Humanity

The plurality of 48% in latest KDnuggets poll say Artificial Intelligence will not be a threat to Humanity, but really interesting and scary questions have been raised - perhaps humanity is a threat to progress?

Recent KDnuggets Poll asked Will Artificial Intelligence be a threat to Humanity?

I hope that the results were not skewed by bots wanting to minimize their perceived threat, but a surprising question was raised by "Mike" in a comment below: if promoting humanity opposes progress, then when AI becomes good and humanity bad?

... humanity and science are on the same side ...until something more intelligent emerges. Then, promoting humanity opposes progress and vice versa. So, it comes down to what you consider to be important. I define myself by my intelligence, not by my flesh.

The 20th century has shown the terrible results (and uncounted millions killed) of putting people second to ideology, so I hope that whatever value people put on progress it is not higher than the value of humanity. 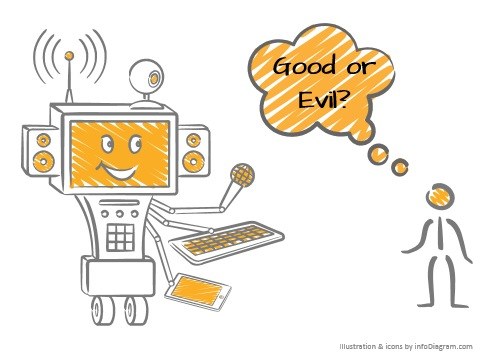 Is AI Good or Evil - drawn for KDnuggets by Peter Zvirisky of Infodiagram.

with region height corresponding to the number of votes (except for All entry). Interestingly, only in Africa/Middle East did majority of voters think that AI will be a threat to humanity.

Mark Norrie, AI - A [potentially] massive threat
If researchers succeed in creating a fully non-human AI, probably by mimicking biological structures (e.g. the octopus brain) and also using emergence as an accelerator there can be no doubt that such an entity will share very little with us in terms of viewpoint/perspective etc. If it is logical (very likely) then it will have no choice but to regard us as a threat and if anyone is stupid enough to hook it up to an offensive weapons grid we are for it.

Magdy Mamdouh, Why do we think AI will out smart Human thinking
It is very strange how people believe that AI will outsmart human beings intelligence, it is a completely different type of intelligence which has similar domains to human intelligence.
As for people who believe than Self Aware AI will not have a code of ethics, let me tell you that ethics don't come from no where, it comes from logical reasoning, so AI will have a code of ethics, although it is not necessary to be exactly the same as the Human one

Leo, Subtle threat to humanity
It will be a threat to our privacy. The entities controlling the data will control our lives to some extent. The corporations will nag us with their advertisements.

Gregory Piatetsky, Editor, Over-reacting
Unlike any previous technology, full AI, if created, will have a mind of its own and potentially smarter than humans. Just look at the history of encounters between more and less advanced human civilizations, like Europeans and Native Americans, etc and it is hard to be optimistic for the less advanced group, which humans will become if full AI is created.

Harold, AI good/bad is waste of time
Application of technology can be anything. Knives can be murder weapons or life saving tools used by surgeons.
People have feared new technological possibilities through history. Little over one hundred years ago farmers chased cars with pitchforks claiming them to be Satan's invention.
Are we not over-reacting?

Gregory Piatetsky, Editor, Humans are not Intelligence alone
Mike, what is to prevent intelligence without human ethical values to destroy all humans, because they consume precious resources?

Mike
If you are self-interested, science is good because it improves humanity. If you are altruistic, humans are good because they advance science. Either way, humanity and science are on the same side ...until something more intelligent emerges. Then, promoting humanity opposes progress and vice versa. So, it comes down to what you consider to be important. I define myself by my intelligence, not by my flesh.

Gregory Piatetsky, Editor, Yes, this is good?
Mike, unless you are a bot and not human, how "AI being a threat to humanity" can be good?

Gregory Piatetsky, Editor, bots voting
Peter Skomoroch @peteskomoroch tweeted: you know voting bots will just rig those poll results to be 99% "No" ;)
This is funny, but I did detect bots voting at previous polls - usually at the direction of their human masters !