We examine top LinkedIn groups in Analytics, Big Data, Data Mining, and Data Science from the Big Bang era of group creation to present, and identify the largest groups, the fastest growing groups, and 2 main clusters.


By Gregory Piatetsky, KDnuggets on April 19, 2015 in About KDnuggets, LinkedIn, LinkedIn Groups

In this post we analyze membership growth trends. Here is our post which examines the activity, comments, and discussions.

We re-examined what are relevant groups and added 7 groups with at least 6,000 members

and dropped 2 smaller groups: PMML, and BI Tools which had less than 4K members.

We also extracted full data from each group statistics page which allowed us to go back to the start of LinkedIn groups in 2007.

The chart below shows the breakdown of top groups by quarter of creation. 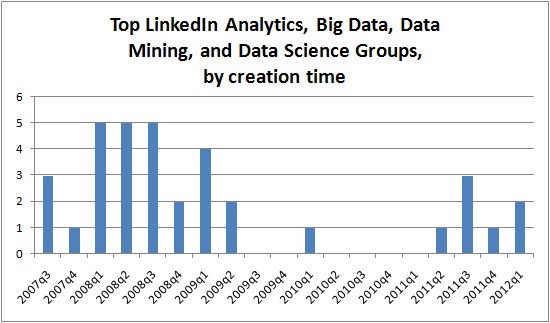 We note 2 big clusters - most of the top groups created from 2007 Q3 to 2009 Q2, and many of these groups had Predictive Analytics or Data Mining in their (original) names.
Note: LinkedIn allows group to be renamed up to 5 times, and many of the older groups have been renamed to keep up with the latest trends.

The second, smaller cluster has 7 groups, which were created from 2011 Q2 to 2012 Q1 - during the beginning of Big Data boom, and the largest of these groups have Big Data in their name. Somehow, no top groups were created in 18 months between June 2009 and Apr 2011 (perhaps due to recession?).

Next chart shows group membership growth, with nicknames of the top groups shown on the right. 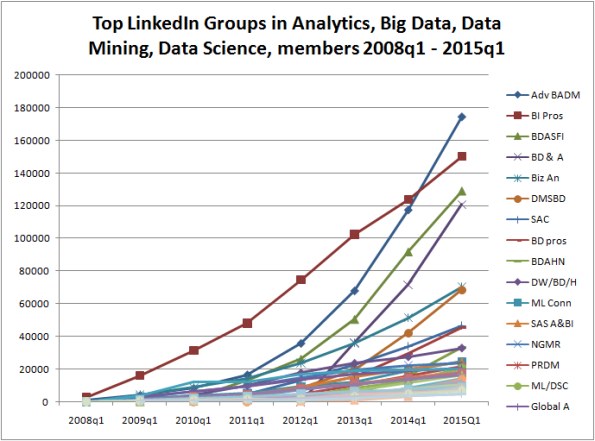 Next chart shows the average growth on logarithmic scale, which declined from Big Bang-like 16,000% in 2008 to a more reasonable 47% in 2014. Notice the increase in creation rate in 2011 which reflects the creation of the second cluster of groups then. 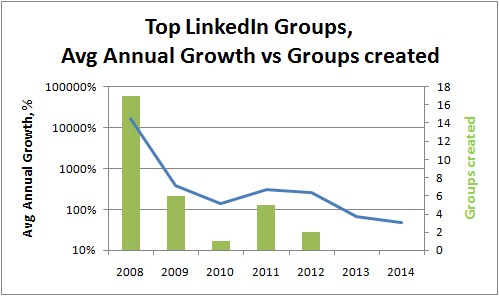 Next we look at the largest groups and their growth.