Cloud machine learning services are popping up by the tens, providing automated data science solutions. What will the anticipated customers want? They may follow a peculiar distribution reminiscent of the uncanny valley.

Over recent decades, many investors have come to see ostrich farming as a coming panacea. Their meat is red like beef, but lower in cholesterol. Their thick skin is desired for the production of ostrich leather wallets, shoes, handbags, and luggage. These birds can grow to be 300lbs and their feed-to-meat ratio is far more favorable than cattle farming. As a result, there have been incredible bubbles in the ostrich farming industry, with prices for the birds driven by breeders, not consumers. Massive farms have been set up for the purpose of growing the ostrich stock, in anticipation that future consumers will demand the birds.

Unlike tulip mania, where consumers drove a speculative bubble, ostrich mania more closely resembles the dot-com bubble in which investors drove up the price of technology companies, anticipating that they would some how justify their incredible valuations in the future. It's worth noting that in the case of the tech bubble, investors were generally correct. As a sector, high-tech has come to justify many earlier valuations with matching earnings. Some companies like Amazon and Apple have greatly exceeded their pre-crash valuations. However, in specific cases, investors clearly often cot the details wrong, e.g. America Online. 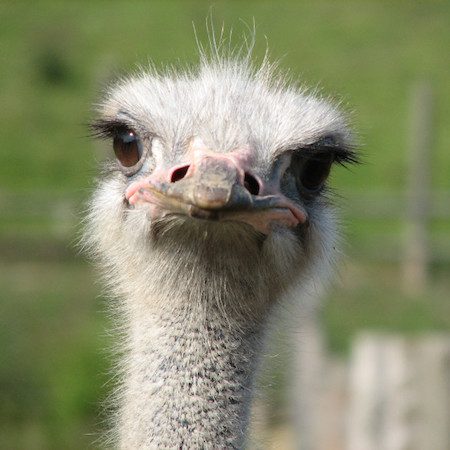 Ostrich mania may very well pan out. Many farmers are betting on it. In fact, many visionary ideas follow the ostrich mania paradigm. The aggressive bid, of Tesla and several other other automakers to roll out electric cars similarly anticipated future consumer demand that had not yet materialized.

My point in this article is not to suggest that the ostrich mania paradigm is a recipe for failure but instead to suggest that when a product's customers all live in the future, it is especially important to consider critically what the preferences of these hypothetical consumers might reasonably be. For example, if the compatibility of ostrich meat could with the American palette could be assessed, an aggressive push into American ostrich ranching absent this diligence would be an unfortunate mistake.

So where's the connection to cloud machine learning services? A slew of recently launched companies plan to offer machine learning / predictive analytics as a service. Many are bankrolled with Series A financing. Metamind, Clarifai, Dato, ForecastThis, among others have joined the fray. Large established companies have also lined up offerings, including IBM Watson Analytics, Microsoft Azure ML, and Amazon Machine Learning. Mostly, these projects anticipate a rising mainstream demand for data analysis beyond the current small group of cognoscenti.

To clarify, I do not believe this all to be folly. Clearly, machine learning services are already providing value every single day to every single smartphone or computer user. The email ecosystem could not function without high quality spam filtering. Voice recognition baked into every smart phone depends upon state of the art deep learning systems to transform phonemes into text.

Indirectly, people are already paying billions of dollars for machine learning services and the value is real. But, of course they don't know it. The systems work automagically. A smartphone user doesn't know what data the phone is accessing or what F1 score the spam filter achieves. They are end users of a fully automated system.

On the other end of the spectrum, it's clear that expertly built, highly specialized state of the art systems are valuable. The consumers of these systems are large institutions, hiring top-tier computer scientists. Hedge funds like Renaissance hire machine learning experts to build systems for predicting securities prices. Of course they want custom systems that achieve better performance than any others in the world. They're not in the market for out-of-the-box good-enough solutions.

In contrast, most of the latest crop of offerings provide a service that lies somewhere in the middle. These companies offer various forms of more flexible machine learning services. In the most common variety, a user supplies a new dataset and chooses some variable to predict. The service then chooses and trains a classifier which can be accessed through a web interface or API to make future predictions.

You may have heard of the uncanny valley. Roboticists and animators often speak of it. Owing to Japanese robotics professor Masahiro Mori, the idea suggests that as a robot becomes more human-like, our feelings towards it grow more positive. Up until a point that is.