The CRN identifies top 25 big data infrastructure, tools and service companies offering everything from hardware servers, to software platforms and applications, to cloud-based services. The list includes major players in the big data space like Microsoft, Amazon, and IBM!

The top 25 Big Data Infrastructure companies, part of CRN Big Data 100, are leading vendors that have successfully helped businesses work with big data by bringing to the market next-generation data management and infrastructure technologies. Innovation is what differentiates each of them!

A striking trend to notice in the list is that most of these companies are competing to provide the flexible, easier-to-manage cloud based data warehousing services as an alternative to traditional on-premise systems. Businesses can leverage these capabilities and thereby, reduce costs and development times associated with on-premise systems.

Here is a word cloud representing the most common & significant words in the list of companies description. 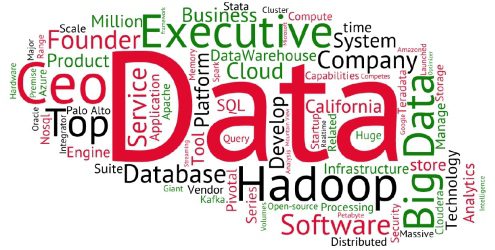 As many as 8 companies in the list are best known for their leading data storage technology equipped with massively parallel processing engines & database, while some others are known for providing security to the huge volumes of data stored.

A majority of these companies have broad product lines and provide development tools with a focus on Hadoop applications. These include tools for Hadoop administration, data governance, security, big data management, data integration, business intelligence, rapid deployment tools for Hadoop and other software/hardware platforms for enterprise data processing.

In the list below, companies which were not in CRN 2014 Big Data Infrastructure Companies list are indicated with