Review of the steps taken by White House over last six months to modernize police data systems to better fight crime as well as build trust between community and police.

Since last few years, we have been occasionally seeing headlines about Big Data / Predictive Analytics success stories from Police Departments. At best, these are like twinkling stars in a dark night. Faced with declining budgets, increasing responsibilities, and limited human resources, law enforcement has typically had data analysis as either virtually non-existent or at most in its primitive form.

The rapid pace of technological development has created multitude of new data sources such as social media networks, CCTV video footage, etc. that could be of immense value for operational decision making and day-to-day policing. Thus, the police data systems desperately need an upgrade, otherwise more data will increasingly be a challenge rather than being an opportunity. After cascading for a long time, the problem has now become big enough to get attention from the highest office in the country.

Here is a brief summary of White House / POTUS events on Police Data, inter-leaved with my personal review:

Last December, President Obama signed an Executive Order to create the Task Force on 21st Century Policing. The task force was asked to look into one of the most burning issues faced by our country – lack of trust between the law enforcement agencies and the people they protect and serve – as witnessed in multiple incidents across the country.

In March 2015, the task force submitted an interim report with more than 60 recommendations to the President. The report clearly acknowledged the need for data:

“While the United States presently employs a broad array of social and economic indicators in order to gauge the overall ‘health’ of the nation, it has a much more limited set of indicators concerning the behavior of the police and the quality of law enforcement.” - Division of Policing of the American Society of Criminology

Data collection, supervision, and accountability are also part of a comprehensive systemic approach to keeping everyone safe and protecting the rights of all involved during police encounters.

The Violent Crime Control and Law Enforcement Act of 1994 requires the U.S. Attorney General to “acquire data about the use of excessive force by law enforcement officers” and to “publish an annual summary of the data acquired under this section.” But the U.S. Department of Justice (DOJ) has never been allocated the funds necessary to undertake the serious and sustained program of research and development to fulfill this mandate. Expanded research and data collection are also necessary to knowing what works and what does not work, which policing practices are effective and which ones have unintended consequences.


However, when it comes to the recommendations they barely scratch the surface of the potential of data analytics towards enabling better policing. Reading recommendations such as the following one would rarely guess them to be from 2015 when the whole world is harnessing data as one of the key strategic assets:

2.2.4 ACTION ITEM: Policies on use of force should also require agencies to collect, maintain, and report data to the Federal Government on all officer-involved shootings, whether fatal or nonfatal, as well as any in-custody death.

2.5 RECOMMENDATION: All federal, state, local, and tribal law enforcement agencies should report and make available to the public census data regarding the composition of their departments including race, gender, age, and other relevant demographic data.

2.6 RECOMMENDATION: Law enforcement agencies should be encouraged to collect, maintain, and analyze demographic data on all detentions (stops, frisks, searches, summons, and arrests). This data should be disaggregated by school and non-school contacts.


Wouldn't you expect the above recommendation/action-item as something that must have already been in practice by now?

The absence of even basic data collection and reporting mechanism on critical aspects of policing is one of the biggest challenges towards any data-driven investigation of Ferguson, Staten Island, Cleveland, North Charleston (S.C.), and Baltimore incidents.

Even in cases, where such mechanism exist, they are rarely compatible and inter-operable, thus, delivering very limited usability.

The lack of consistent standards leads to a constantly spiraling increase in technology costs. …  Inconsistent or non-existent standards also lead to isolated and fractured information systems that cannot effectively manage, store, analyze, or share their data with other systems. As a result, much information is lost or unavailable—which allows vital information to go unused and have no impact on crime reduction efforts. … there is a lack of uniformity in data collection throughout law enforcement, and only patchwork methods of near real-time information sharing exist.


It is important to note that data analytics is needed not just to better protect the citizens, but also to protect the officers who are often forced to make sub-second decisions in high stress situations. A majority of officer injuries and deaths result not from interaction with criminals, but rather from poor physical health due to poor nutrition, lack of exercise, sleep deprivation, and substance abuse. While there is extensive data about vehicle maintenance, weapon service, etc. there is virtually no data about the physical, mental, and behavioral health of law enforcement officers.

In order to make the job of policing more safe, a nationwide repository for [law enforcement officer] injuries sustained is desperately needed. A robust database of this nature, analyzed by medical providers and scientists involved in law enforcement, would allow for recommendations in tactics, training, equipment, medical care and even policies/procedures that are grounded in that interface between scientific evidence, best medical practice and sound policing. - oral testimony of Dr. Alexander Eastman, lieutenant and deputy medical director, Dallas Police Department


Even though the 35 year old Bureau of Justice Statistics (BJS) publishes numerous reports every year, it clearly needs to do much more to deliver operational insights to law enforcement agencies nationwide, besides delivering macro-level aggregated statistics to policymakers.

On Monday May 18th, President Obama announced the Police Data Initiative in Camden, NJ. This initiative, a byproduct of the president’s Task Force on 21st Century Policing, will be implemented in 21 leading jurisdictions across the country. The goal of this initiative is to establish a community of practice that will allow for knowledge sharing, community-sourced problem solving, and the establishment of documented best practices that can serve as examples for police departments nationwide. The effort includes two main streams of work: 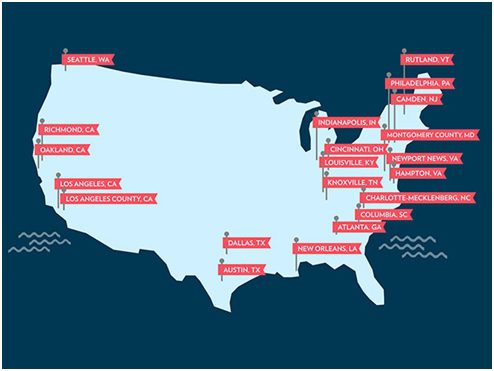 Many organizations, including Code for America and the Police Foundation, are participating in this initiative to help police departments jumpstart on open police data efforts.

In order to boost internal accountability and effective data analysis, 12 police departments have committed to sharing data on police/citizen encounters with data scientists for in-depth analysis, leading to better insights for police to intervene early and more effectively.

On Wednesday May 20, Dr. DJ Patil, the U.S. Chief Data Scientist, hosted a Twitter chat to discuss the Police Data Initiative, and how data can empower community policing. As soon as the chat started, people shared concerns about the quality of Police Data: 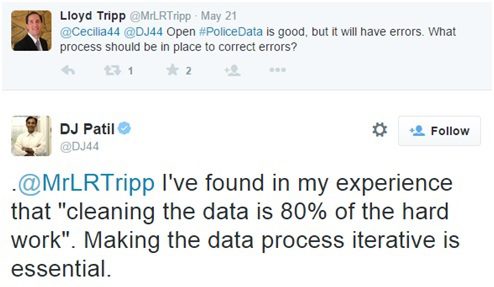 Some people were also concerned that data collection could lead to greater chances of information leakage which can compromise investigations, and also that bad data could lead to bad decisions. One of them referred to the Pew research stating that Americans have little confidence that their data will remain private and secure. Dr. Patil clarified that privacy and security must be central to all data projects. Besides, data collection is often prohibited for ongoing cases.

While the need for standards was evident, Dr. Patil remarked that the standards should not become a hurdle: 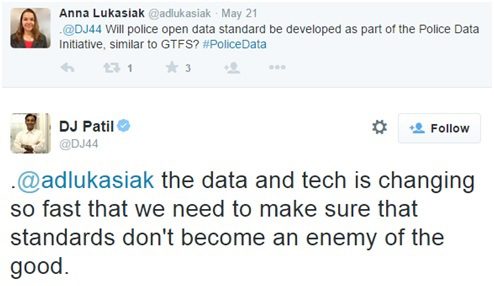 The chat ended with a call for participation, highlighting the importance of team work in Data Science:

So, the Police Data Initiative has got the conversation started and is making some steady progress. Amid today’s turbulent times, the expectations are very high and patience to achieve results is very little. Thus, the initiative would have to demonstrate early success for long-term interest across the nation.

This is no doubt the toughest challenge in the career of U.S. Chief Data Scientist and let’s hope he succeeds here as brilliantly as he had in his past roles.