A Visual Introduction to Machine Learning, Why Google's new patent applications are alarming, Art with Google's Inceptionism code, Google Photo's algorithm gone wrong and a Neural network tutorial made it to the top this month! 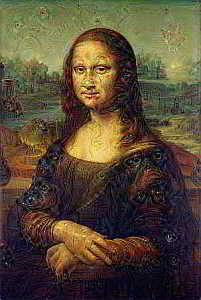 Try out your own neural network inspired art with Google's Inceptionsim code -DeepDream!

1. A Visual Introduction to Machine Learning +314

In this post, the author creates a machine learning model to distinguish homes in New York from homes in San Francisco. What is exciting is that it is all represented in a fun scroll down visual using D3.js!

This post links to Google's six patent applications for machine learning methods. It mainly highlights issues concerning US patent laws for allowing patents on well-known abstract ideas. Is there a damage to academic culture that could result from this new trend? Check out the discussions to learn about the concerns and consequences.

You can create neural network inspired images by yourself! Google Researchers have blogged about a visualization tool that is designed to help understand how neural networks work and what each layer has learned. In addition to gaining some insight on how these networks carry out classification tasks, they found that this process also generated some beautiful art. They open sourced the code which is based on Caffe, a deep learning framework.

4.With results this good, it's no wonder why Google wanted to patent classification! +247

Here's a discussion about Google's Face Recognition Algorithms going wrong! Google’s new Photos service, which uses machine learning to automatically tag photos miscalculates two African-Americans as "gorillas". Google's chief social architect was quick to respond over the weekend to a user after he tweeted that the new Google Photos app had mis-categorized a photo of him and his friend in an unfortunate and offensive way. Was the algorithm not enough trained? Read on to find out.

This post is a tutorial that teaches back propagation via a very simple toy example, a short python implementation. It's a simple to follow guide to get started. One killer exercise the author recommends is to try and rebuild the network from memory! [Get Code]