1. Neural Algorithm That Paints Photos Based on Given Painting Style +435

Neural networks and their art are all the rage lately. In a fresh take on things, however, German researchers share their algorithm for having NNs generate stylized paintings of photos based on a given input painting style. Picasso’s Obama, or Munch’s take on the Eiffel Tower? No problem! The paper is located here, and code (Lua, Torch and CUDA) can be found here. 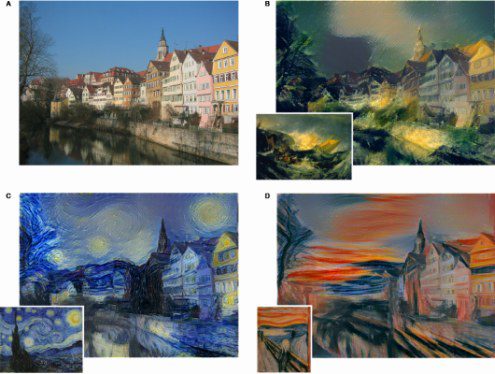 Modern day renaissance man John Henry Holland passed away this month at 86. Holland was known for his work in complex systems, as well as for being the father of the genetic algorithm. While this post is simply a link to a tweet, much more on this story can be read here. RIP Mr. Holland.

This iPython Notebook tutorial is meant to demonstrate a basic data analysis pipeline task, from start to finish, using the Python stack. Put together by Randal Olson, graduate student at the University of Pennsylvania, the tutorial works with the well-known Iris dataset along with mainstay libraries such as Numpy and scikit-learn. Aimed at beginners, it is noteworthy in that it covers from defining the question right through to ensuring reproducibility.

This article explains LSTM, or Long Short Term Memory, Networks in an embarrassingly accessible manner. While the mathematics are treated, writer Christopher Olah does a great job of explaining in plain English what makes LSTM Networks unique from other Recurrent Neural Networks. His step by step walkthrough of an LSTM is an exercise in clarity.

Geoffrey Hinton is at it again. Building on previous work in neural networks and deep learning, Hinton says that Google is working on a new algorithm for encoding thoughts as numbers - hence, thought vectors. Though at an early stage, it is thought that an algorithmic breakthrough could help overcome 2 currently unsolved problems in AI - the ability to make leaps in logic, and the mastery of conversational language.