Smart cities face serious challenges prior to widespread acceptance, but their integrated use of Big Data, IoT, and other technologies to solve contemporary urban issues should eventually lead to their adoption.


There has been a lot of activity around the concept of Smart City for some time. Cities are being identified as future smart cities. Theoretically at least, smart cities can fundamentally change our lives at many levels such as less pollution, garbage, parking problems and more energy savings. Though the prospect seems mouth-watering, the implementation of the smart city concept around the world has been sporadic at best because of several reasons. Whatever the stage the smart city implementation is at globally, big data and the Internet of Things (IoT) have the power to drive the implementation. Big data and the IoT are going to work with other software and hardware to lead the vision of smart city to fruition. However, the path ahead is full of challenges.

The South Korean city of Songdo is an appropriate example of how big data has changed it. Songdo is located just 40 miles from Seoul and 7 miles from the Incheon International Airport. Songdo has 1500 acres of land reclaimed from the city and 40% of its area is earmarked as open area. Although we hear a lot about smart cities these days, the vision of building Songdo into a completely connected city started getting implemented way back in 2000 with a projected cost of $35 billion. Now, in 2015, Songdo is at the threshold of realizing that vision. Cisco has been working on the project and it is making sure that every inch of the city is wired with fiber optic broadband. So, Songdo, the smart city, is going to massively impact the lives of its 65,000 residents and the 300,000 who will commute daily to Songdo. Given below are some ways this smart city is going to behave.

• The traffic will be measured and regulated with the help of RFID tags on the cars. The RFID tags will send the geo location data to a central monitoring unit that will identify the congested areas. Also, the citizens will always know via their smartphones and mobile devices the exact status of public transportation and its availability.

• Even garbage collection will generate data. Residents who dispose of garbage will need to use a chip card in the containers. The city planners and architects along with Cisco are working on the concept of totally eliminating garbage trucks. Garbage trucks will not collect and dispose garbage anymore. Each house will have garbage disposal units and garbage will be sucked from them to the garbage treatment centers which will dispose it in an environment friendly way. The garbage will used to generate power for the city.

• Data will make life more secured for the citizens. For example, children playing in the parks will wear bracelets with sensors which will allow the children to get tracked in case they go missing.

How can big data potentially contribute to smart cities?

The example of Songdo above has already given some ideas on how can big data and IoT contribute to smart city development. Still, it is worth to explore some more areas.

• Big data can help reduce emissions and bring down pollution. Sensors fitted in the roads will measure the total traffic at different times of a day and the total emissions.The data can be sent to a central unit which will coordinate with the traffic police. Traffic can be managed or diverted along other less congested areas to reduce carbon emissions in a particular area.

• Parking problems can be better managed. Cars will have sensors attached which can guide the car to the nearest available parking lots.

• The environment will cooler and greener with less energy being consumed. In Bristol, a program that involves development of a wireless network based on IoT is under way. This network will use less energy and power than the traditional Wi-Fi and mobile networks. So, batteries on mobile devices will last more and there will lesser need to charge the devices frequently.

The above list is by no means exhaustive and has been provided for illustration only.

The graphic below nicely sums up the impact big data can have in building smart cities. 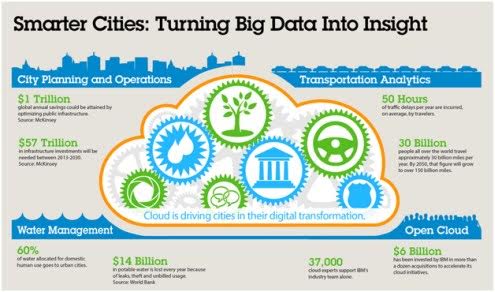