A Neural Network in 11 lines of Python

A bare bones neural network implementation to describe the inner workings of back-propagation.

As you can see in the "Output After Training", it works!!! Before I describe processes, I recommend playing around with the code to get an intuitive feel for how it works. You should be able to run it "as is" in an ipython notebook (or a script if you must, but I HIGHLY recommend the notebook). Here are some good places to look in the code: Let's walk through the code line by line.

Recommendation: open this post in two screens so you can see the code while you read it. That's kinda what I did while I wrote it. :)

Line 01: This imports numpy, which is a linear algebra library. This is our only dependency.

Line 04: This is our "nonlinearity". While it can be several kinds of functions, this nonlinearity maps a function called a "sigmoid". A sigmoid function maps any value to a value between 0 and 1. We use it to convert numbers to probabilities. It also has several other desirable properties for training neural networks. 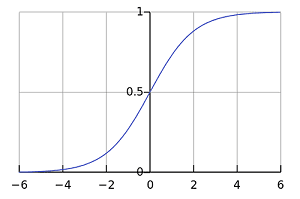 Line 05: Notice that this function can also generate the derivative of a sigmoid (when deriv=True). One of the desirable properties of a sigmoid function is that its output can be used to create its derivative. If the sigmoid's output is a variable "out", then the derivative is simply out * (1-out). This is very efficient.

If you're unfamiliar with derivatives, just think about it as the slope of the sigmoid function at a given point (as you can see above, different points have different slopes). For more on derivatives, check out this derivatives tutorial from Khan Academy.

Line 16: This initializes our output dataset. In this case, I generated the dataset horizontally (with a single row and 4 columns) for space. ".T" is the transpose function. After the transpose, this y matrix has 4 rows with one column. Just like our input, each row is a training example, and each column (only one) is an output node. So, our network has 3 inputs and 1 output.

Line 23: This is our weight matrix for this neural network. It's called "syn0" to imply "synapse zero". Since we only have 2 layers (input and output), we only need one matrix of weights to connect them. Its dimension is (3,1) because we have 3 inputs and 1 output. Another way of looking at it is that l0 is of size 3 and l1 is of size 1. Thus, we want to connect every node in l0 to every node in l1, which requires a matrix of dimensionality (3,1). :)

Another note is that the "neural network" is really just this matrix. We have "layers" l0 and l1 but they are transient values based on the dataset. We don't save them. All of the learning is stored in the syn0 matrix.

Line 25: This begins our actual network training code. This for loop "iterates" multiple times over the training code to optimize our network to the dataset.

Line 28: Since our first layer, l0, is simply our data. We explicitly describe it as such at this point. Remember that X contains 4 training examples (rows). We're going to process all of them at the same time in this implementation. This is known as "full batch" training. Thus, we have 4 different l0 rows, but you can think of it as a single training example if you want. It makes no difference at this point. (We could load in 1000 or 10,000 if we wanted to without changing any of the code).

Line 29: This is our prediction step. Basically, we first let the network "try" to predict the output given the input. We will then study how it performs so that we can adjust it to do a bit better for each iteration.

This line contains 2 steps. The first matrix multiplies l0 by syn0. The second passes our output through the sigmoid function. Consider the dimensions of each:

Matrix multiplication is ordered, such the dimensions in the middle of the equation must be the same. The final matrix generated is thus the number of rows of the first matrix and the number of columns of the second matrix.

Since we loaded in 4 training examples, we ended up with 4 guesses for the correct answer, a (4 x 1) matrix. Each output corresponds with the network's guess for a given input. Perhaps it becomes intuitive why we could have "loaded in" an arbitrary number of training examples. The matrix multiplication would still work out. :)

Line 32: So, given that l1 had a "guess" for each input. We can now compare how well it did by subtracting the true answer (y) from the guess (l1). l1_error is just a vector of positive and negative numbers reflecting how much the network missed.