Will machines become smarter than man? What technology will dominate Data Science? What is smart data? Read Big Data experts predictions for 2016. Predicting the future is never an easy task. But as 2015 winds down, we can’t help but look forward to what the new year will bring.

Will you finally be able to buy a self-driving car? Will machines become smarter than man? And what, will happen to the world of data science?

We’re no fortune tellers, so we rounded up a bunch of experts to ask them what they thought. And here (in no particular order), is what they said:

What is going to be the biggest data trend of 2016? 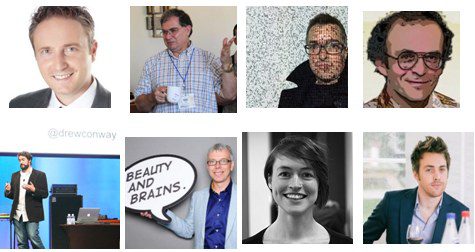 “2016 will be exciting for Big Data – Big Data will go even more mainstream. 2016 will also be the year when companies without solid big data strategies will start to fall behind. In terms of technology, I see particular growth in real-time data analytics and increasing use of machine-learning algorithms.”

“In 2016, the world of big data will focus more on smart data, regardless of size. Smart data are wide data (high variety), not necessarily deep data (high volume). Data are “smart” when they consist of feature-rich content and context (time, location, associations, links, interdependencies, etc.) that enable intelligent and even autonomous data-driven processes, discoveries, decisions, and applications.”

“In 2015 we learned that 90% of the world’s data had been created in the previous 12 months. In the middle of this BigData explosion, I watched many executives desperate to get themselves up-to-speed as quickly as possible, in order to understand the commercial opportunities that these vast quantities of information will offer their business.

In 2016 – I hope to see those same executives not just looking towards how they can capture as much commercial value from that information as possible, but how they can create the best experiences for their customers. The bigdata motto for 2016 therefore needs to be “We must create more value from data than we capture.”

“2016 will be the year of deep learning. It will move from experimental to deployed technology in image recognition, language understanding, and exceed human performance in many areas.”

“I would say Data science for the masses is one and the other is more disruption with open source technologies to the point that no one knows what Hadoop means anymore, and more projects we never heard of trying to flatten the time to data science.”

“[In the last decade] an ecosystem of tools, services, and companies have been built to address these digital problems. This is by no means meant to downplay those contributions. A decade later, and we built some amazing technology and products. These are, for the most part, solved problems. What remains unsolved are data problems in the real, physical, world.

The next decade of the big data industry will be about solving these problems. Borrowing what we know about building highly available, scalable, smart systems, and inventing new systems for analyzing streams of data emitted when analog actions and decisions occur.

This is both a natural progression of the industry, but also a fundamental shift in the kinds of technologies, people, and companies that will constitute the next generation of the data industry.”

“I think Big Data is ripe for consolidation in 2016. However, I see consolidation playing out differently in this space. Rather than one analytics firm taking over another, I see analytics being added into all sorts of enterprise software, from threat detection to marketing automation. The consolidation will happen horizontally in a variety of platforms, and some Big Data startups could well get absorbed by an incumbent in whatever vertical it is that they are disrupting.”