We review how Big data and data science can provide accurate analytics to help deal with climate change with tools like Global Forest Watch, Microsoft Research’s Madingley Model, and the Google Earth Engine.

Climate change has been attracting a lot of attention for a long time. The adverse effects of climate change is being felt everywhere. For example, sea levels are rising, glaciers are melting, cities are experiencing recurring floods and deforestation is on the rise. Global sea levels will rise two to seven feet during this century. Climate change has wide-ranging implications that include financial and safety. For example, Weather Analytics, a company providing climate data estimates that 33% worldwide GDP is impacted by weather.  The adverse effects of natural calamities such as tornadoes, tsunamis, wildfires, and hurricanes are well-documented.

To handle this issue, countries need good action plan which should be made on the basis of accurate, real-time or near real-time analytics. Big data and predictive analytics can potentially provide accurate, real-time or near real-time analytics. Over the years, a lot of work has already been done on this front which is reflected in the availability of tools such as Global Forest Watch, Microsoft Research’s Madingley Model, and the Google Earth Engine. Given the rate at which climate is changing, we need to respond fast. Big data and predictive analytics technologies have enabled stakeholders to process huge volumes of data fast and generate accurate insights. Sensors are collecting data on various variables such as rain, soil, and forest cover and helping establish correlations between datasets. It is clear that big data and predictive analytics is, and will be one of the most important tools governments will be using while they find ways to mitigate effects of climate change.

How absence of big data and predictive analytics can impact climate change policy?

This goes without saying that without big data and predictive analytics, policies or plans on climate change will be severely handicapped and one-dimensional. Some possible scenarios without big data in the equation, even if imaginary, could be the following:

Policies and strategies aimed at climate change phenomenon have been significantly influenced by big data and predictive analytics. Both government and non-government companies have been developing trendsetting tools and technologies that help formulate advanced climate change actions. These tools and technologies, needless to say, are based on big data. Enormous volumes of data on different variables such as temperature change, sea levels, forest cover and carbon emissions are collected every moment and analyzed. These tools can establish the correlation between different variables, provide actionable insights, predictions and patterns based on which proactive actions or precautions can be taken. How big data and predictive analytics are influencing the fight against climate change can be best understood by the contributions of a few tools and technologies, as described below.

It is an interactive map and tool developed by Climate Central, a nonprofit, independent organization. Surging Seas provides information on the rising sea levels in the United States. You can use the map to see accurate sea levels at different places, view flood warnings, action plans, sea level patterns, historical data, embedded widgets and more. According to Richard Wiles, who is the vice president for strategic communications and director of research with Climate Central, “Our strategy is to tell people about their climate locally in ways they can understand, and the only way to do that is with big data analysis.” 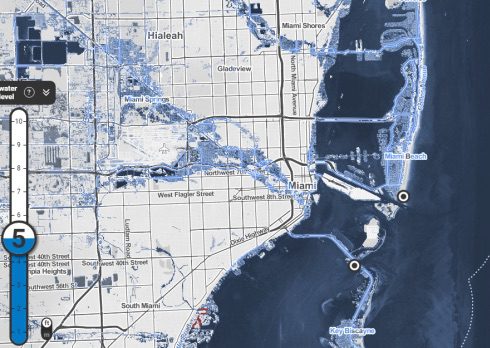 The Google Earth Engine compares the state of environment across years or decades, identifies problems so that it can be fixed. An example of how this works is the Lake Urmia, a salt lake in Iran. Google Earth shows that in 1984, the color of the lake was teal blue. After a few years, the color has changed to green. Cut to 2012, the color is brown. Similarly, deforestation in Amazon has been tracked. The engine compiles publicly available satellite imagery to identify environmental damages across the earth.

http://www.data.gov/ is a huge collection of more than 192,289 datasets on an array of topics. Of course, climate is a part of all these datasets. These datasets provide credible, updated data on an array of climate-related topics. You can, for example, expect a live feed of earthquakes happening across the earth, time lapse maps showing changing temperature in the Great Lakes throughout the year, and fertilizer prizes. How valuable could the inputs from this website be is demonstrated by a small project developed in 2006. It was about a tool that analyzed the impact of change in climate on crops. So influencing was the tool that Monsanto bought it.

It is a tool that helps track the forest cover across the world. It offers an interactive map which provides an array of information such as forest cover, deforestation in any specific region, forest fire. The tool is a popular one, used by such entities as the Indonesian Government, Nestle and Unilever.

Reduced energy consumption has a positive impact on climate. Reducing energy consumption needs to percolate down to every citizen. Citizens are usually influenced by the energy consumption of their neighbors. Opower, a company working on energy analytics, has used this bit of behavioral pattern to do their bit for climate change. Opower sends personalized reports tocitizens that compare the energy usage of neighbors. And it is yielding results. Since Opower started in 2007, it has been able to save almost 6 billion kilowatts of energy, enough to provide energy to a city of 1 million citizens in a year.  According to Rick McPhee, the head of engineering at Opower, “Behavior nudging helps reduce user consumption and are friendlier than mandatory blackouts.”

It is clear that big data and analytics are redefining the climate change policies of the governments. In fact, big data seems to be an indispensable component of climate policies. Big data technology has been able to process enormous volumes of complex climate data, establish correlations when required and provide real-time analytics. Almost all of the tools mentioned above have been able to provide real-time data. However, big data can only do so much. After all the data provided, it is up to the stakeholders to take concrete actions.