Who watches the watchmen? This article examines the recently available Chicago Police misconduct allegation dataset from the Invisible Institute. 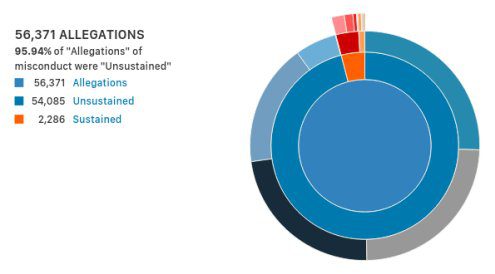 The Invisible Institute is a self-described "journalistic production company," hailing from Chicago's South Side, working to strengthen society's capacity to enforce the accountability of public institutions. It seeks to facilitate reforms using human rights documentation, investigative reporting, civil rights litigation, and public information. The stated central principle of the Invisible Institute is, "we as citizens have co-responsibility with the government for maintaining respect for human rights and, when abuses occur, for demanding they be addressed."

One of the projects undertaken by the Invisible Institute is the Citizen's Police Data Project (CPDP). In 2014, the Kalven v. Chicago decision opened previously-secret City of Chicago police misconduct records to the public. Those records, which make up the contents of the CPDP, were released on July 29, 2014. The Invisible Institute and its collaborator, the University of Chicago Law School's Mandel Legal Aid Clinic, hope the CPDP becomes a national model of accountability and transparency.

It is not the goal of this post to endorse any view regarding the allegations of police misconduct, either generally or in specific cases. It is, instead, intended to bring the data and the CPDP to the attention of the reader. You are welcome to investigate the data yourself and draw conclusions as you see fit.

As of this writing, the CPDP contains data on 56,371 allegations of police misconduct involving 8,662 police officers, of which 54,085, or 95.94%, are unsustained. Allegations are further broken down by misconduct category (personnel violations, illegal search, use of force, etc.), race & gender (both complainant and officer), police district, ward, neighborhood, and police beat. Interacting with the data has a real BI dashboard feel, and includes reactive, color-coded maps, charts, and the like. 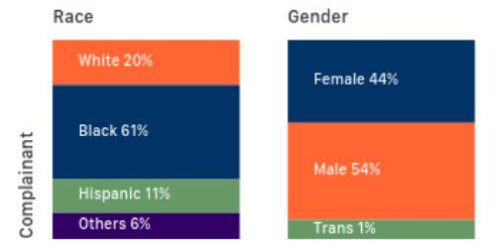 The CPDP website contains several highlighted findings of note, which include:


The data can be explored in your browser in the web app. Once you have drilled down to lower granularity, resulting tables can be downloaded locally in Microsoft Excel format.

The entire dataset, however, is not obtainable in this manner. If you are a researcher, a journalist, or some other (potential) collaborator, you are able to directly request access to the entire dataset. I made just such a request several days before writing this; however, as of this writing, this request had yet to be responded to, and as such, our data investigation proceeds using what is immediately available to anyone accessing the website.