The Star Wars social networks – who is the central character?

Data Scientist looks at the 6 Star Wars movies to extract the social networks, within each film and across the whole Star Wars universe. Network structure reveals some surprising differences between the movies, and finds who is actually the central character.

The individual networks again show that the prequel trilogy has more characters and more interactions overall. The original episodes have less characters, but they interact more with each other.

It really is the story of the tragedy of Darth Vader, and it starts when he’s nine, and it ends when he’s dead.
(source)

But is Darth Vader/Anakin really the central character? Let’s use some methods from network analysis to see who is really important in the stories and their social structures.

I computed two measures of importance in the networks for each of the films:

The two measures both show how important is a character in the network. The degree centrality shows how many people does each character interact with directly. The betweenness relates more to how integral each of the characters is to the story. Characters with high betweenness connect different areas of the social network.

For both measures, higher values mean more importance. Here are the top 5 characters for each movie:

It seems that Anakin is overall the most connected character in the first three films, based on his degree. He is however not very integral to the relations in the films! His betweenness score is so small he never makes it to the top-5 characters. This means that all the other characters interact directly between themselves rather than through Anakin. How do the same measures look for the original trilogy?

Here both the centrality measures show very similar results – Luke is the most central character across all the films, and using both measures. The order of characters based on the two measures is almost the same.

The centrality analysis quantifies some of the things we could see from the social networks. The prequel trilogy has more complex social structures, with more interconnected characters. This also leads to the fact that Anakin is not that central to the story – some of the storylines happen alongside Anakin’s story, or involve Anakin only on the side. On the other hand, the original trilogy has a more tight-knit structure. There is a smaller number of central characters and they bind the story together – this results into the agreement between the degree and betweenness centrality measures.

Perhaps this is part of the reason why the original trilogy is more popular – the plots are more consistent and driven by the main characters. The prequels have a more decentralized structure and no clear hero. Although the stories are linked by Anakin, he is not binding the other characters together.

How do the measures look when we look at the full social network from all the episodes together? I looked at two variants of the network. In the first one Anakin and Darth Vader appear as two separate individuals, in the second I merged them together into a single person.

If we look at Anakin and Darth Vader separately, Anakin is still the most connected character but he’s not central to the network. If we merge them together, things improve a bit. Now Darth Vader/Anakin is the third most important character in terms of betweenness. Overall, the social networks seem to show that the Star Wars movies are actually linked together by Obi-Wan Kenobi rather than Darth Vader. 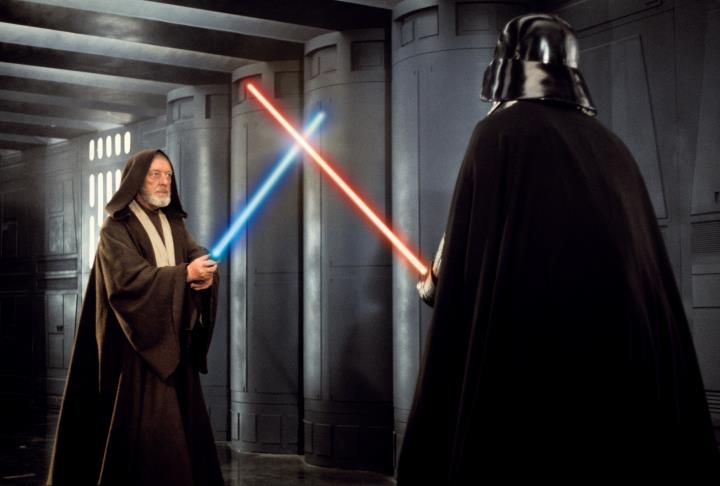