Global warming has been argued in depths and breadths and arguments for and against are championed too.Here, with a simple data science we obtained a simple (and increasingly accepted) conclusion: the global warming is real.

Mmm. Lost a planet, Master Obi-Wan has. How embarrassing (Yoda, Attack Of The Clones)

Some time ago I published this post in KDnuggets in which I analyze historical temperatures to show how we are gradually heading toward a warmer planet. Simple data science to obtain a simple (and increasingly accepted) conclusion: the global warming is real. Despite I was criticized I still believe what I said then: you don’t have to be a climatologist to empirically confirm global warming.

This experiment is another example of that. It is still simpler than that since it is only based on visual perception but I think is also quite conclusive. In this case, I represent U.S. temperature outliers from 1964 to 2013; a map per year. Dataset contains station ID, name, min/max temperature, as well as degree coordinates of the recorded weather. Original weather data collected from NOAA and anomalies analysis by Enigma. You can download data here.

Anomalies are divided into four categories: Strong Hot, Weak Hot, Weak Cold and Strong Cold. For each station, I represent difference between number of Cold and Hot anomalies (independently of the strength) so Blue bubbles represent stations where total number of Cold anomalies during the year is greater that total number of Hot ones and Red ones represent the opposite. Size of bubbles is also proportional to this indicator. As an example, following you can see the map of year 1975:

It seems 1975 was hot in the right a cold on the left side. Concretely, in TONOPAH Station (Nevada) were registered 30 anomalies and most of them (26) where due to cold temperatures. This is why bubble is blue. This GIF shows the evolution of all these maps from 1964 to 2013: 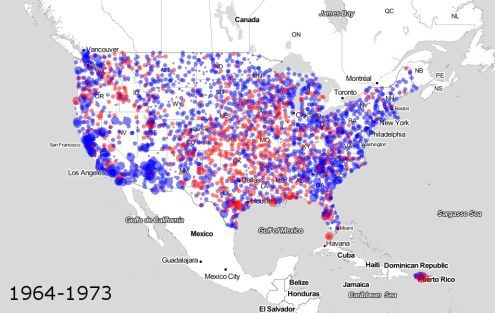 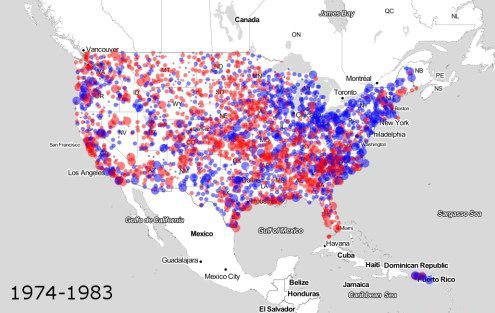 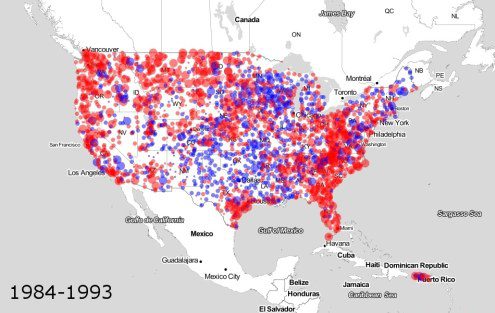 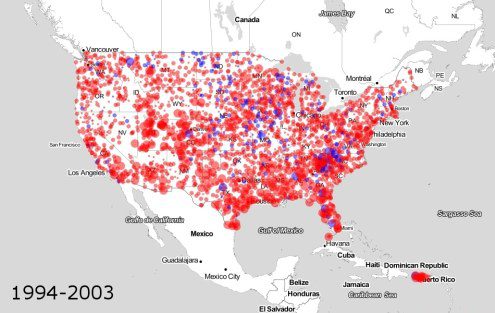 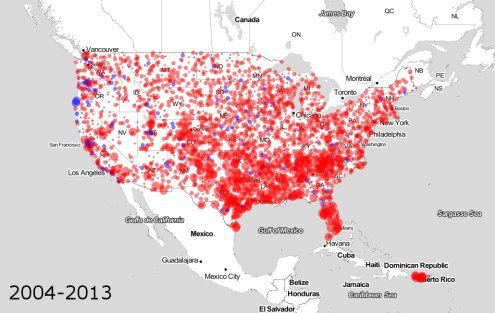 Maybe it is just my personal feeling but don’t you see how red bubbles are gradually winning to blue ones? Maybe I am a demagogue.

This code generates a dynamic map by year in html format: